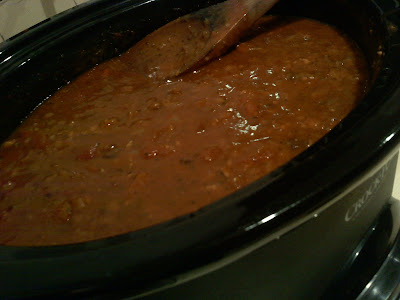 This is my husband's most requested soup. It was chock full of hamburger and pepperoni and covered with melty mozzarella cheese.
However, I think this version was sufficient to satisfy. (I did broil some real deal pepperoni for the omnivores in the house, and there was mozzarella cheese, too. I ate it plain and it tasted....like pizza in a bowl.)
Pizza Soup - Vegan Version
14 oz can/jar of tomato sauce
1 cup chopped peppers (green or mixed)
1 cup diced onions
1 cup mushrooms (you can do whatever veggies you like on your pizza)
1-2 TBSP Earth Balance
2 cans diced tomatoes with juice (14 oz)
1 jar (the standard size, 25 ozs whatever flavor, I used a chunky Vegan version)spaghetti sauce. You could make the equivalent amount of your favorite sauce.
1 and 1/2 cups vegan "hamburger"
1 and 1/2 spaghetti jars of water (or about 38 ounces or 4 and 1/2 cups more or less)
1 tsp garlic powder
1 tsp salt
2 TBSP dried Italian spice mix.
In a pan melt earth balance (or mix of EB and olive oil) saute the onions and peppers til tender, add the mushrooms.
Dump the veggie mix and all the rest into a 4 quart (or bigger) crockpot. Stir well. Simmer for at least six hours (low) so all the flavors marry. If the soup is too thick add more water or another can of tomatoes. It will cook down and thicken. If you want to stay vegan and need cheese go for Daiya. Dipping garlic bread or bread sticks into it is delicious. Rob said this version is as good as the original.
Posted by Scrambled Dregs at 1:10 AM No comments: