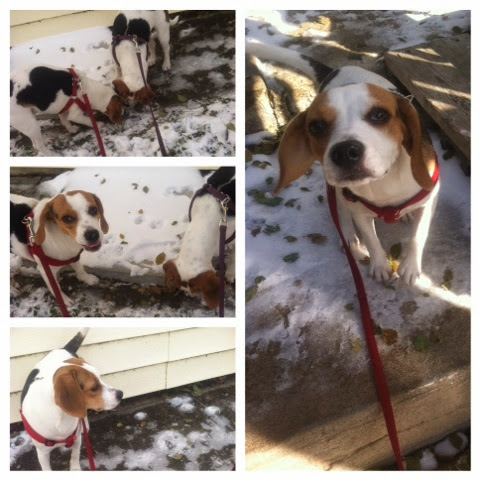 For some reason the snow and arrival of winter weather threw me. I mean, I live in an area that certainly gives huge clues of climate changes. And winter comes every stinkin year. There are degrees of winter, but, it isn't a "hmmmm, did we have winter this year?" kind of a place. Ya know.

I spose I shoulda prepared the pups. But I just didn't think I needed to. Yet.

Here are the degrees of winter awareness and acceptance. In this instance there are four degrees.

The first response was porch statuing. That is where they refused to move and turned to stone. Once I stepped out into the white foreign substance they followed. (They'd probably make me test their food and drink if they could speak and owned scepters. No, wait. I think they do consider me a food tester. Except I'm eating people food that they legitimately think is theirs.)

Second was the discovery phase where they basked in the newness of it all. Many minutes in the still silence of the gray blanket of cold were punctuated with deep sniffing and snoodling.

Thirdly was the discovery of this amazing, miraculous substance's perks. It's edible. Thin layers of it could be broken off and consumed. Greedy snow grazing commenced.

Finally, the marking of the snow. This is their snow. Nobody but nobody needs to doubt that.

At least they didn't stand and bark at it. 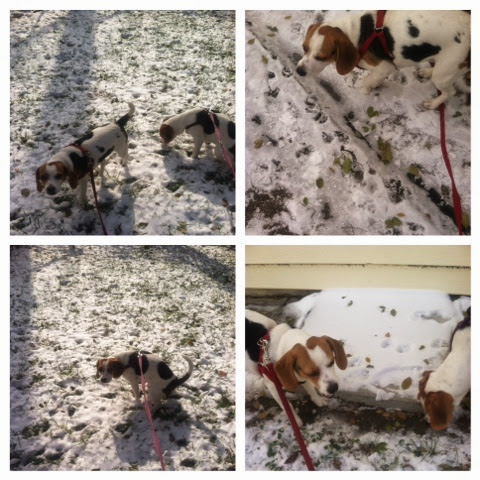