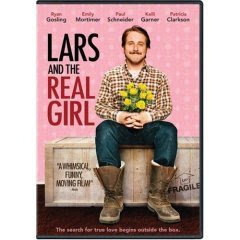 Watch Lars once to marvel at the storytelling, the acting and the heart of this film. Watch it over and over again to absorb the charm, the quirk and life-altering love. At least that's my plan.

I adore films where ordinary and slightly broken people stretch and grow into someone inspiring and beautiful. This is that story, and not just one character inspires, several rise to the opportunity to become better versions of themselves.

Lars is damaged. His childhood was a shadow of what it should have been. Instead of love and nurture, he received a grieving husk of a parent. But the adult Lars is okay as a loner. Functional even. Until circumstances invade his tranquility and suddenly he's forced back into some of those dark places, back into grief and fear. But instead of dealing with those issues like most of us do, he comes up with a creative way to reach out to his arm's length friends and family. He invents a soul mate. Unfortunately, she's not invisible like a child might conjure up. "Bianca" is bigger than life in most definitions of the word.

Lars' quirky support system rallies around, choosing to make his delusion theirs. Bianca, a missionary from Brazil, here to meet Lars, her Internet love, is embraced and becomes a popular citizen. Gosling gives a stellar performance as he runs through the emotional gamut of a stunted man who has tucked life away into a spot where he is not going to be hurt and where he will not find love, the thing he needs the most.

The story unfolds as the townspeople reach out to Lars and Bianca while Lars tries to find his way out of his self-imposed prison cell.

One warning -- Bianca is a "doll" from an adult website and her original purpose isn't to help a young man find emotional healing. There are some sex/anatomy jokes, a little sophomoric humor, and "build your own girl" visuals from the website. Surprisingly, the ick factor is low and Lars and his brother are very respectful of Bianca and its obvious that Lars and Biancas' relationship is "chaste." But if you are sensitive, keep that in mind.

Others may not like the open ending. Several details are not explained. We are given clues to the reason for Lars' brokenness and why he is breaking at this point in his life. The ending is open, too. The pace is also slow. We're talking a character piece and most of those don't have a lot of intense action. I'm drawn to British/Irish films, and Lars feels very much like a Brit film. About a Boy is one of my favorites. I Am Sam is another film that comes to mind because of the complex, and real characters.

Bottom line, you won't like this film if you don't want to think. You won't like it if you have to have a lot of fast-moving action. But if you delight in characters and stories of humanity in its messiest and most beautiful moments, you owe it to yourself to check out Lars. As for me, Lars will be added to my all-time favorite movie list.
Posted by Scrambled Dregs at 8:24 AM 1 comment: