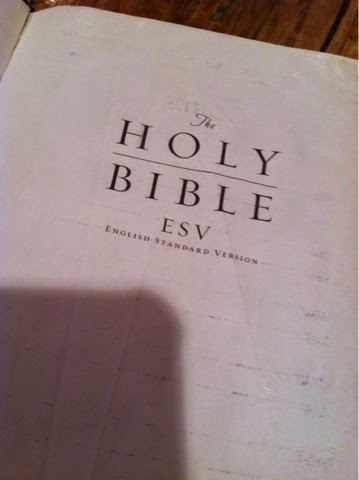 I think God has a great sense of humor.  And sometimes I think He is less likely to be offended than most of us are.

My cousin has been in church about as many times as the fingers on one hand. He's not exactly a seeker, but he's open to thinking about seeking. After Grandma died her Bible went to my cousin. My brother asked my cousin if he's been reading it. There are a whole lot of Thee's and Thou's and impossible for my cousin to read.

They were together running some errands and my brother needed to make a stop. He had a Bible to buy for a friend so my cousin agreed to go in with him to the local Christian book store. My brother suggested they could find an easier version for my cousin.

So my cousin was drawn to the wall of Bibles. He reached for the largest leather bound number and flipped it over.

"They want f-BOMB-ing $125.00 dollars for this?!?" He said. His voice carried in the large acoustically clear building. My brother, shocked, stage whispered. "Watch your mouth!" My cousin looked up and around at the shocked faces. "S- _-_-_ !" Yep, he said that one, too.

The good news is that they picked up a much more reasonably priced Bible and he's reading it. Must have figured at those prices it must be good stuff.
Posted by Scrambled Dregs at 7:00 AM 2 comments: