Our SWAT team doesn’t arrive in a big black ATV that belches stealthy, studly killers like we see on movies. Our SWAT team members each have a day job. Whether it’s being a detective plodding through the required paperwork that makes up the majority of his job. Or as a sergeant who gets to review all the red-light runners video footage, these guys put in their time. But when THE phone call comes they spring into action. 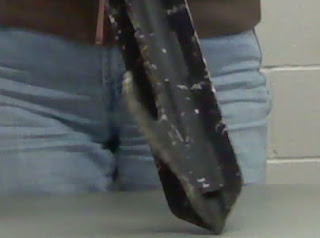 Action might mean, as it did a couple weeks ago, standing in place for nine hours, watching a garage door. Not exactly what you see on television. Okay, he was given hourly five-ten minute pee breaks. Oh, while watching the garage door for any sign that the armed man inside might be making a deadly move, said officer was holding a body shield. This weighed about twenty pounds, if I remember my number correctly, and had to be held at an awkward angle to protect himself from any stray or intended bullets. Oh, and he also wore a sixty pound vest. The vest was passed around the room, and though I consider myself to be a pretty strong female, it was a challenge to lift it. He wore it for nine hours...plus he also had weapons…and let’s not forget the shield. Then when the situation was safely neutralized he then got to jump into the required paperwork.

Our SWAT team is called EST (Emergency Services Team). They are summoned for high-risk situations, depending on when they occur. Three a.m. or 3:00 p.m. makes no difference. They are also scheduled for high-risk search warrants. The team is made up of team players, no lone wolf gun men are “hired” because without trust in each other the team is handicapped. Rigorous training and testing is required to make the team. These officers are no doughnut eating stereotype. They are fully loaded professionals who carry their weight, the weight of others and sometimes the weight of the world. And lest you think the game is all physical think again, it’s mental, too. The commander has to assess situations, make decisions and has to consider the full consequence of their choices, and that the actions of their team may land them in hot water and in front of a grand jury. And they need to know that an order will be followed without question by the officer who receives it. For example, a flash bomb or distraction device is generally a non-lethal, lots of noise, shock and awe tool. But to deploy one requires answers and those answers better be acceptable to the powers that be.

If you ever have wondered why, in hind sight and with the limited facts given to we civilians, a better decision was not made, the above paragraph is your answer.

The EST members told a story of a stand off that ended with the perpetrator’s death. The guy had been slippery for months, hiding in special places that were booby trapped and loaded with  days worth of supplies, food and drugs. He’d set up a compound that was going to be one of those the media talks about for days, weeks, months if it was not neutralized. The team was called in and they used the stealthy approach of over land and through a creek bed. When there was a clear shot and the perpetrator was heading for a room full of fire power he was taken down. And the department was raked over the legal coals. The "victim" had not been actively shooting at the moment, just headed for the literal big gun.

Bottom line. This job is one that requires a grown-up with guts.

And for those of you who wondered about the nasty looking flesh-eating hook. It’s a break and rake. The point breaks windows, the hook rips out mini-blinds and curtains etc. so the guys can do their work. I know. I thought it was something really scary.
Posted by Scrambled Dregs at 6:00 AM No comments: