Scribbles and Scrambles ~ Rob the Builder ~ He Can Do It.

I've got to share some special "art" with you.

Disclaimer: You know that I laugh at inappropriate times. Like in church and the world's saddest movie -- and when someone suffers a non life-threatening injury.  So. This is my confession, my shame and flippin' hilarious.
Rob teaches construction technology and occasionally he comes home with some great stories. The other day he brought home a picture. 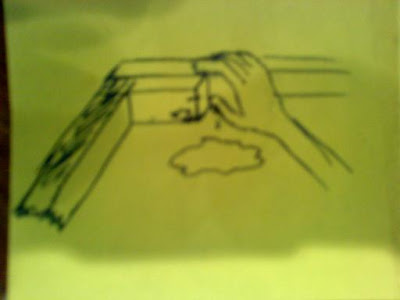 My favorite, oops, "Rob didn't see that one coming" moment happened two years ago. But it didn't have any art, so I'm going to tell this one.
After days of studying safety with tools, it was time to work (read play) with tools. Finally. The kids were excited and maybe a little nervous. Rob had done a good job painting word pictures of "tools can hurt you" scenarios.


The lab consisted of kids, two by four boards and nail guns with nails. The group worked together so Rob could give tips and offer help. One gun was a bit sluggish, the other, well, calling it hair trigger might be appropriate. Each student got to nail with each gun. The speedier gun was the one assigned to the next student in the lineup so Rob got into position. "I'm going to hold this board here, you shoot it into place here." Simple, no problem. Until the kid accidentally bumped the trigger and produced an extra shot. Where did the shot go? Into Rob's thumb and then into the board. Rob's done a few different variations of this before, it's old news to him. It missed all vital stuff and he said it didn't really hurt. However. The reality of the teacher nailed to the board caused a little bit of mass panic. Rob calmly explained that he was fine. No. An ambulance didn't need to be called. All was well. He just needed a little help removing his thumb from the board. A hammer was asked for an produced and prying commenced. When that didn't work, the nail was pounded out the way it came in. All good til it twisted. Rob calmly took over the full procedure, pulled the nail, slid his thumb off the nail and went to the first aid kit.
All in a day's work.
He then noticed that the poor operator of the nail gun looked a little green. He got him safely seated before nature took it's course.
The next day the artwork appeared on a kid's desk. When asked why he'd drawn the incident. The artist said it needed to be commemorated.
Posted by Scrambled Dregs at 3:50 AM 2 comments: