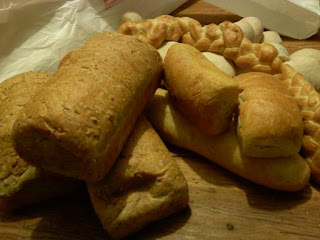 We've been taking classes like crazy lately. And learning lots of great information.
The farmers are taking us to an organic growing class in early December. One of the sessions will be all about non-pesticide pest control. Hopefully they will teach the words and steps to the Horrible-Horned-Tomato-Worm be-gone ritual.
Until then & and I have signed up for four weeks of Kitchen Chemistry. Sounds dangerous to me, too. Especially with the two of us on board. Good news, we don't actually touch the hot pots, the blenders, the chef knife. We get to eat the examples though. This instructor leans Vegan.
Our first class was all about fats. Useful information and a few great substitute ideas. Tofu Hollandaise and Caesar salad dressing were actually called tastier by several non-vegans in the class. 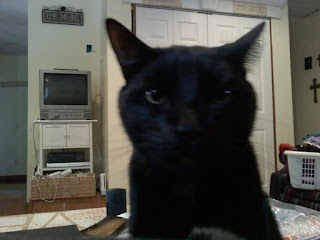 I learned the following: That very little flavor comes from the fat, including butter. Fat is added for texture, heat transfer and binding. So it can be tweaked with to avoid some fat. She suggested that fried foods can be roasted if the heat transfer issue is handled correctly. Fried foods need the frying oil to be at the 300-350 stage so that the oil immediately sears the food and seals it. So the oven needs to be set to 450 to compensate. A cast iron cooking source (i.e. pan or griddle) or baking stone can be preheated with the oven. Then the veggies laid upon it (allowing space for proper cooking) and the food put back into the oven. A nice crust/sear should occur and create a texture that is similar to frying. Hmmm. Going to have to try that out. She also said that nut meals can take the place of some fat and some flour. 1/2 cup equals 2 TBSP fat, 2 TBSP flour. I'll be trying that out as well. Veggie and fruit pulp can be used in place of oil in salad dressings and other items. Potatoes can add cream to soups. And when doing a vinegar oil dressing. Always put the spices/seasoning in the vinegar and let it sit for 5 -10 minutes. The water soluble portion is what accepts the flavors.
I'm also partnering with & at a Dave Ramsey Financial Peace University class. Uhh, if you don't have common sense money skills, hate money handling, have a desperate need to make some changes, look into taking this class. Seriously good information. I actually understand the concept and a tiny bit of the language of investing after just one video lecture.

Posted by Scrambled Dregs at 4:26 AM No comments: