Scribbles and Scrambles ~ Have a Good Day... 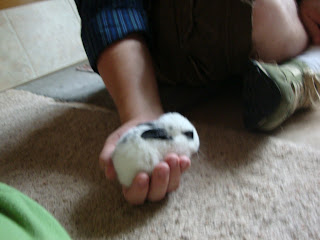 My brother and his friends (one of which is 2, and pretty stinking cute, but I digress) came over to have a bunny bonding session.

Amazing how I've seen my friends and family so often of late. Note: If you are lonely, have a batch of bunnies, it's really a boost in the popularity department. 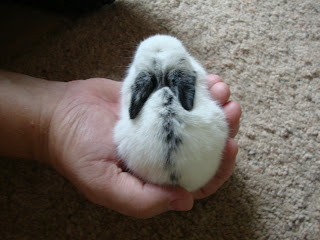 But, I digress, again. One of the bunnies decided to take a little nap in my brother's hand.

He tried nudging it out, he tried tipping his hand a bit. The bunny was not budging. So since we were kind of stuck, we began talking about it. 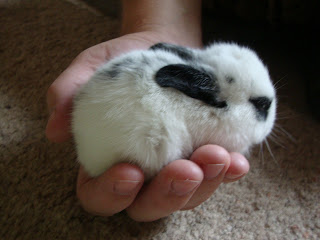 We decided that there are far worse things to have happen than being held captive by a sleeping baby bunny. And, there are those folks who have worry stones or stress balls. Wouldn't a bunny in your hand be the ultimate stress reliever?

How could you have a bad day with a soft, warm, sleepy bunny in your hand?

My bro said, "Boss calls you into his office. He ends up firing you after chewing you out for something you didn't even do. But it's all good. Cuz you got a bunny in your hand."

Here's hoping that your day is so good it's like a bunny in each hand.

Posted by Scrambled Dregs at 5:42 AM No comments: