Fiction lovers who love to dive deep into the inner workings of the soul....this is for you. 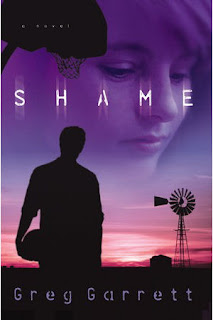 It's hard to appreciate the life you have when you're wondering about the one you might have had.

John Tilden's glory days are far behind him, and now it seems like all he has is the monotony of everyday living. He certainly thought there'd be more to it than his ramshackle Oklahoma farm and a mundane job coaching basketball at his old high school. He questions his fatherhood skills too: His oldest son won't speak to him, his younger son wants to quit the basketball team, and now his daughter wants to go out on dates. He loves his wife, but the marriage has settled into complacency.

With John's twentieth high school reunion approaching, he has agreed to play in an exhibition game with the old championship team. And his ex-girlfriend's back in town, newly single. What might have been now seems closer than ever.

If you would like to read the first chapter of Shame, go HERE


I don't think my review can do justice to Shame. But I'm going to try. For starters, I was given the advanced reading copy via a pdf file and had to read it while attached to my computer. This is not my first choice in reading, I like to be able to cradle a book and curl up wherever I chose. The computer is just not the same.

Even though this was an annoyance, I voraciously devoured this story.

The characters became so real to me that I wept. But before I wept, I wrestled along with the inner struggle of John, and the unknown that lay sprawled on his horizon and the ties that kept him at bay. There were moments, basketball details mostly, where I didn't hang on every word, but the struggles, the tension, the story of what-if and what-might-have-been and what's-the-point pulled on every one of my emotional strings leaving most of them taut and humming.

Garrett writes with poignancy and fluidity, words filled with visuals and other sensory experiences that paint scene after scene in the readers' mind. In Shame, he aptly tackles the common human conditions, the ones we all have to face, eventually. The things we try to medicate, drown, and subdue, the haunting specter of relationships and regrets, and the reality of whom we are being the sum of our choices.

Shame will be on my 2009 favorites list. Fans of authors like Tom Morrisey and Wally Lamb may want to look into it. Readers who can't handle slower moving narratives or introspection might want to read more reviews and a sample of the writing before purchasing. CBA only readers may balk at some of the scenes, this is PG-rated inspirational fiction. David C. Cook has been publishing novels that are real, gritty, envelope-pushing and thought-provoking, and they get a double thumbs up from me.

My book-buddy, Kim, has a very different take on the book...go here to read her thoughts. Valid ones...because you all know how my brain quirks.

Author of the critically acclaimed novels Free Bird (chosen by Publishers Weekly and the Rocky Mountain News [Denver] as one of the best first novels of 2002) and Cycling, as well as the nonfiction books The Gospel Reloaded (with Chris Seay), Holy Superheroes!, the spiritual autobiography Crossing Myself, The Gospel According to Hollywood, and the forthcoming Stories from the Edge, Dr. Garrett is a past winner of the Pirate's Alley William Faulkner Prize for Fiction, and a regional CASE gold medalist for nonfiction.

He was elected to the Texas Institute of Letters in 2005 for his lifetime literary achievements. Professor of English at Baylor University, Dr. Garrett was named the Outstanding Baylor Faculty Member for 1994 by the Baylor Student Congress, and received the university administration's outstanding professor award in 1996. He received his Ph.D. in English from Oklahoma State University, and recently completed the M.Div. at the Episcopal Seminary of the Southwest in Austin, where he lives, writes, and serves as a lay preacher at St. David's Episcopal Church.
Posted by Scrambled Dregs at 1:37 PM No comments: