Serials and Scenarios - The Kidnapping of Kenzie Thorn - Liz Johnson 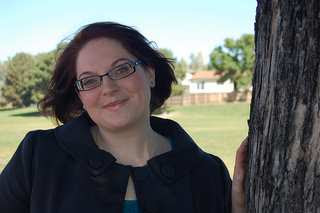 Fiction character you would most like to be, marry, or most identify with and why?

It’s hopeless. I’ll never find a man, because wouldn’t you know it, real men rarely live up to Miss Austen’s heroes. But that hasn’t stopped me from compiling a list of the top three fictional characters I’d like to marry. Not all at once, mind you. But if one should be unavailable, I’d be pleased to move on down the list.

I don’t know if it’s a ritual so much as a bad habit. :) I like to get into my pajamas, prop up pillows behind my back, and plot my laptop on my legs. It’s bad, bad posture, terrible position, and the place that I write better than any other.

Purple cow. Hands down. :) Purple is my favorite color and I was born in Iowa. Lots of cows there. :)

Definitely one of my favorite word pictures is in Harry Potter and the Half Blood Prince. When Harry stumbles across Ginny and Dean “snogging” in the corridor, a monster roars to life in his chest. It’s the perfect picture for what it really feels like when you suddenly realize that you’re head over heels for someone. And I love it when Harry and Ginny finally kiss and the monster “purrs.” So perfect.

The Civil War era has always intrigued me. I love the fancy dresses and uniforms. The balls and the women who stayed at home, waiting and wondering about their men. I’m enthralled by the idea that brothers fought brothers, and all to preserve their way of life. I was reading about the war several years back and saw some statistics about the number of lives lost. Over 600,000 casualties. More Americans lost their lives in the Civil War than in any other war America has ever fought … because both sides were Americans. What causes a man to go to war against his neighbor? I just find the reasons for the war and the different battles so interesting.

Movies. Really good, really funny movies. But I don’t think I have much of an aptitude for that style of writing. Maybe I’ll take some classes on it. :)

Definitely humor. I love to laugh, and when something or someone makes me chuckle, they’ve found a place in my heart. Books, movies, songs. All of it. If I genuinely laugh, it’s nearly a given that I’ll really love it.

It’s not that I love sweeping. I just love going barefoot around my house. So when the hard wood floors start to get dirty, I can really tell. It kind of grosses me out. So I love it when they’re clean and swept and barefoot ready.

Peeking over the edge of the leather-bound tome propped on the library table, she couldn’t tear her gaze away from the handsome man on the far side of the opposite table. He glanced up, blue eyes zinging, and her eyes immediately dropped back to the page in Shakespeare’s collected works. Smoothing her hand over her obnoxious perm, she sighed. How had she ever let her roommate talk her into trying a home perm? Was it 1986 or something?

But the real problem was that she’d never finish her report if she didn’t stop sneaking peeks at Mr. Blue Eyes. Nope, she needed to go back to her dorm room if she was going to get anything done. Packing up her book bag, she hurried toward the door.

Heads popped up from behind research books across the wide open library. Several irritated students shushed the commotion, but Jill didn’t stop until she felt a hand on her arm.

Spinning around, she came face to face with the blue eyes she’d been admiring all night.

“You forgot this,” he said, holding out her purple, knit scarf.

“Fred.” His smile brightened, and their fingers brushed as she took back her scarf. They both looked down at the contact at the same time.

He nodded, his blond hair falling onto his forehead. “See you here tomorrow?”

“Umm …” She brushed her wild hair over her shoulder. “Sure.” 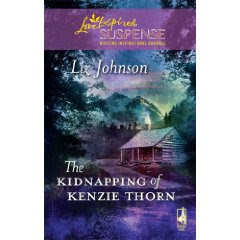 Myles Parsons is just another inmate in Kenzie Thorn’s GED course until he kidnaps her, offering only a feeble explanation–that he’s actually FBI Special Agent Myles Borden. Terrified, Kenzie doesn’t want to believe his story of being undercover to protect her. Moreover, she can’t believe that someone might really want her dead.

But just when Myles thinks he has her out of harm’s way, his plans start to fall apart. He attempts to take Kenzie to a safe house—but the stubborn woman won’t go! So together they must uncover the clues that will reveal a most shocking perpetrator. All the while Myles tries to keep his distance from Kenzie … but finds himself falling in love.

The Kidnapping of Kenzie Thorn adheres to the suspenseful romane genre -- boy meets girl, sparks fly, hearts burst, some big miscommunication or issue rips the couple apart then comes the longed for happily ever after conclusion. Add the elements of faith or inspiration and you’ve got a Christian romance.

I have to admit that romance isn’t my favorite. I tend to lean a little more toward realism and the issues that wreck budding fictionalized romances often make me crabby. Really. And, no matter how nice it is to hope for, real men rarely speak romance. Romantic suspense is a much better fit for me. That said Liz Johnson has created the classic, must-have romance characters and scenarios but added a few fresh elements that made Kidnapping an enjoyable read. A nice twist or two ramped up the suspense and the ending was very satisfying. Her storyline is creative, her writing is solid and the faith elements are strong.

Those of you who love romance should look further into this novel. Chickens need to be aware of a little intensity and some blood. Non-romance fans may decide to investigate further into it after checking out the story premise.
Posted by Scrambled Dregs at 3:28 AM 1 comment: