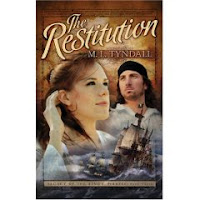 Enjoy...uh...maybe enjoy is a little inappropriate...how about "Argh, jest read it already!"


Thanks Mary Lu...this was fun.
I love to read good, gritty pirate talk. One of my favorite phrases from the book "Pirate Parenting" is "me cat kittened in me mouth"…What is your favorite pirate (real or made-up) phrase?

My favorite real pirate phrase is Dance the Hempen Jig –which means to hang for pirating. (I know, sorry. I have an odd sense of humor.)
The most atrocious and disgusting pirate behavior is (family friendly of course)
(mine would be the teeth of lack thereof – shudder)

Well, as you can imagine, pirates had quite a few disgusting behaviors, personal hygiene definitely among them. You might also say that their language and morals were quite lacking as well. But by far, the most atrocious behavior I have come across was they way they punished members of their own crew. A serious offense, such as trying to take more than their share of the plunder, would ofttimes sentence the offender to a ritual called keelhauling. Without being too graphic, the man was tied to a rope that looped beneath the vessel, then thrown overboard and dragged under the “keel” of the ship. I’ll stop there, short of telling you what that did to him. Yikes!
Describe a pirate's dream date.

First a lovely meal of Salmagundi—a favorite pirate dinner (a stew of chopped beef, fish, turtle, chicken, eggs, anchovies, onions, grapes, herring, cabbage, seasoned with salt and vinegar. Yummy!) by candlelight sittin’ over a barrel on the poop deck of the ship.
A swig of Rum (to be shared with lady fair, only if she has all her teeth an’ smiles at ye real pretty)
Bring out the boys with their fiddles, and dance a jig across the main deck to lewd pirate ballads.
A swig of Rum (to be shared with lady fair if she still hasn’t fainted from the stench of ye)
Show the lady yer treasure and allow her to count the pieces of eight from the chest. (This be sure to get her in the mood for love!)
A swig of Rum (Dependin’ on how much rum ye’s got left, ye may or may not want to be sharin’ anymore with the lady)
Chase the fair lady around the deck fer a kiss (If ye can’t catch her, shoot her)
A swig of Rum (no more sharin’)
Find a worthwhile target. (A Spanish ship, British ship, Dutch Ship, French ship…well, any ship, really) and fire yer cannons an’ blow it to smithereens
Finish off the Rum
Pass out on the deck and lady fair has to find her own way off the ship and back home.


Which "real life" pirate (or legend I suppose) would you have most like to have met? And why?

I would have to say, the pirate, Stede Bonnet, also known as the gentleman pirate. He was a well educated man who had a successful plantation on Barbados, and one day, he gave it all up, bought a ship and became a pirate. Later captured at Charles Town, SC, he was imprisoned in the provost marshal’s house, where he dressed up like a lady and escaped. Unfortunately, he was recaptured only 14 days later and despite his pleadings for mercy—in addition to many appeals from the ladies of Charles Town—he was hung for piracy. His reasons for becoming a pirate? Only God knows, but Bonnet did confess that he found great “discomforts in the married state”. I also tend to think he was just bored. He had achieved all there was to achieve for a man of his breeding and education and found the rest of his days spanning out before him in mindless tedium. But, I’ll wager he was a pretty interesting guy to talk to. (But, then again, I like to talk to unusual people)
Detail your favorite pirate activity, custom or superstition

My favorite Pirate superstition has to be the Flying Dutchman. Even though the Disney Pirate movies have only recently made it popular, the tale has been around since 17th century. The Flying Dutchman is a ghost ship that can never return to port and is doomed to sail the seas forever. Seen from afar, she appears to glow with a ghostly light. If you sail close enough, her crew will try to send messages to people long since dead. A sighting of this ship is a foreshadow of doom. The story goes that it was once captained by a Dutchman Bernard Fokke who made a pact with the devil as he encountered a storm trying to round the Cape of Good Hope. According to other versions, some horrible crime took place on board, and the crew was infected with the plague and not permitted to anchor at any port so as not to spread the disease. Since then, the ship and its crew are doomed to sail forever, never putting in to shore.
And here's my take on the book:
Of the two Legacy of the King's Pirates novels I've read, The Restitution is my favorite. I think it could work well as a stand alone, so even if you haven't read the first two in the series, you can find a great story in The Restitution.

M L Tyndall knows her pirates. Unfortunately, she shares a little too much in the smell department, but, alas, I'm sure being there was worse.

Captain Carlton shaped nicely from a creep (book 2) into a roguish and attractive man. Isabel softened into a woman I could grow to like.

The story moved at a fast clip - probably about 40-50 knots- and there were a few unexpected squalls. Last but not least, romance, hoped for and unexpected alike, flourished under star lit skies.

If you love pirate adventure, adventure in any format, romance, pirates or just fun stories you should find much to like in The Restitution.
Get yer grubby mitts on a copy.
And for the morbidly curious in the group. Keelhauling defined.
Posted by Scrambled Dregs at 1:54 PM 3 comments: