Well a load of things, actually.

There are a few things in my life that I never expected when I was a sweet young thing and still wet behind the ears. 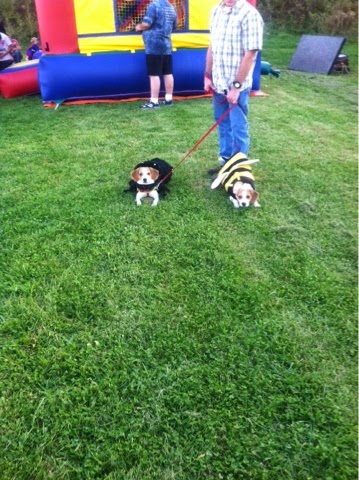 Never, never, never was I a dog person. When I was a teenager we got a recycled dog. Boots was pretty much independent. We lived in the country and she loved to run. Like the wind. I don't remember ever getting to bare my soul to her while she patiently wagged and bestowed doggie kisses to soothe my teenage angst. Nope. Boots only got up close and personal while running and for some reason her favorite reach out and touch someone routine was a long snouted speedily delivered goose. Oh yes. Like I said, not so much a dog person. Oh, and there was the incident with the pampered poodle princess dog that belonged to my friend. The poodle was actually named Princess I think. My friend's mom picked me up on the way home from the groomer. Princess had blue painted nails and matching ribbons. And she sat in my lap. Around a corner we turned and Princess sat on my arm just a bit and left a sit ring which is much, much worse than a bathtub ring.

The other thing lacking in my life was understanding dog people. I mean, what did they smoke? Letting dogs lick them, sleep with them, dress like them. Right? 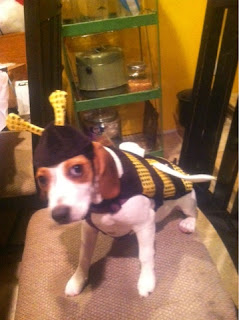 Okay. Over the years I've begun to get it. Lily and Lola pretty much turned me into a dog person. And I spoiled them (to quote their mother). But the pups. Dang. My brain is broken. Note: They sleep in their kennel. Note: I'm quite quick to gross out over certain things. Note: I often tighten up the budget and avoid spending on luxury items.
Note: We bought (yes, we, he's nuts, too) them costumes. The first batch was too small so I even had to go to another Target store to exchange for the medium. The second cashier even rolled her eyes.

I have become that person. I'm going to use the grandbabies as great excuses for this. I mean how precious is it that the 7 year old picked out a bee costume and we unknowingly did the same? Twin bees? And the Dark Knight sure could use a spider side kick, right? If only he'd picked Spider Man.