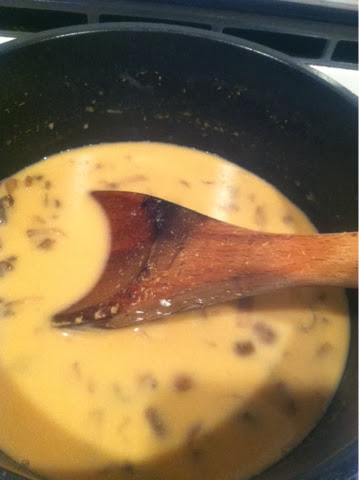 I love mushrooms. Yum. So I usually buy a big package of them at Costco and then have to come up with ways of using them up. I also brought home some Vegan sour cream from our trip to Minnesota. Michelle is so accommodating and spoiling when we visit. She's way more adventurous and generous than I am ingredient wise. She seriously bought a luxury non-dairy cheese for a recipe. I'm like, yeah, we'll just cut out the cheese. I don't usually buy vegan sour cream unless I have a very special use for it because it doesn't last long once it's opened. So I had this partial container of sour cream languishing in my fridge. No way I was letting that go bad. The picture is before the corn starch and sour cream so it was much thicker.

Add garlic and mushrooms, lemon juice, mustard and soy sauce to the vegetable broth in a saucepan. Simmer until mushrooms change color and density. Add the cornstarch and simmer until the broth thickens. Remove from heat and add the nutritional yeast and stir well, then stir in the sour cream.

Serve over your pasta, quinoa, rice, toast or potatoes.

Serves 4ish
Posted by Scrambled Dregs at 5:48 AM 1 comment: