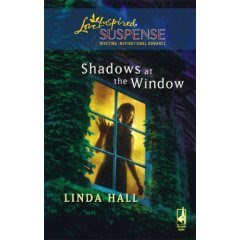 I haven't read Shadows at the Window, yet. But Linda is the author of one of my favorite books from last year. Black Ice would be a nice cool read for a hot summer day....

Linda was kind enough to answer the Dregs questions even though she wasn't able to at the time of my review of Black Ice. 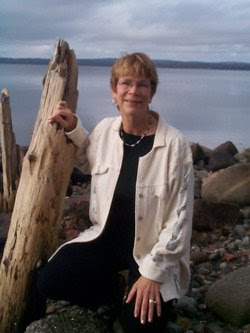 Award winning author Linda Hall has written twelve novels and seven nonfiction books. She has also worked as a freelance writer, news reporter and feature writer for a daily newspaper.
From an early age, she was a lover of stories. As a child she would walk home from school and make up stories, most of which didn't get written down. She also read book after book far into the night. She still enjoys reading, and probably reads a novel a week.
Growing up in New Jersey, her love of the ocean was nurtured during many trips to the shore. When she's not writing she and she and her husband enjoy sailing the St. John River system and the coast of Maine in their 28 foot sailboat, Gypsy Rover II. She invites her readers to her website.
Fiction character you would most like to be or most identify with and why?

Jessica Fletcher in Murder She Wrote. I like the fact that this woman ‘of a certain age’ is classy and independent and smart and a successful mystery writer. I want to be her.

My question would be for Charles Dickens and for his book, A Tale of Two Cities. Mr. Dickens, how did you come up with such a great opening sentence?

I find I get my best writing done in coffee shops writing long hand on unlined sheets of scrap paper with colorful fine point Sharpies.
Back before I wrote novels I was a journalist and when I trained, reporters learned shorthand. So, I write my drafts in a large scrawly shorthand that I must transcribe to the computer just as soon as I get back to my office before I can’t read them anymore.

In Margaret Atwood’s novel Cat’s Eye, I wanted to meet Elaine’s elusive friend Cordelia at the end. I felt cheated. We never get to meet this person who had such a prominent part in the story, but I guess that was the point! I’m still a great Margaret Atwood fan however, and have read everything she has written, and own most of her books - even though they infuriate me sometimes.

In one of his books, Robert Parker describes someone as looking simply “like a sunflower.” It was so much better than going on and on about his wild yellow hair sticking up all over the place and his long, lanky bent-over body. When I’m tempted to go on and on and on with my descriptions, I think of Robert Parker and try to paint a word picture a different way.

If you were assured of writing a best-seller, what genre would it be?

I think I would write exactly what I’m writing now – romantic suspense stories and thrillers. If I had the time I might write a pirate story.

I would write an epic and very long novel set on an old square rigged sailing ship. There would be more women aboard than in the Pirates of the Caribbean movies, simply because there usually were more women aboard. There would be shipwrecks on desert islands and hurling, brutal seas and long periods of becalmed scorching suns. There would be starvation and sickness, but also times of great music and joy. Babies would be born on board, (It’s where we get the expression ‘son of a gun’), and others would die, their bodies committed to the sea. There would be mystery and betrayal and pirates and of course, romance.
The ocean is really our last frontier. It is entirely uncontrollable. I would love to capture that in a book – having the sea itself be like a character rather than merely the setting. You better stop me before I turn this simple answer into a full-fledged proposal!

Sitting beside the ocean, mountain biking over rough terrain in the sun, drinking coffee with friends, sitting outdoors and listening to a good live blues band.

Aside from the Bible, the book I would take would be the entire works of C.S. Lewis. I read all of his books a long time ago, and need to re-read them.

Person? My husband of 36 years. We’ve done a lot of traveling together and I can’t imagine anyone I would rather go on a long trip with.

I like the fall. Here in the eastern part of Canada where I live it’s the most beautiful season with the fall colors. And because of the tempering influence of the Atlantic ocean, our falls are long and warm. The only downside of fall is that winter follows in its wake.

It has to be the ocean. I hope I don’t end up boring my readers, but all my books seem to be set near or on the ocean.

‘I stayed up all night reading your book.’ I love it when readers tell me that. It shows me that I’ve done my job, that I’ve achieved suspense on my pages.

I would spend that time with my family. I have two grown children and three grandchildren, and of course my husband.

Ubiquitous. I just think it sounds cool as it rolls off the tongue.

Utilize. It sounds weird and entirely unnecessary when we have the perfectly good word – use.

Years ago I read a set of children’s stories to my kid. They were The Magic Bicycle series by John Bibee and published by InterVarsity. In one of the books is a pair of glasses and when you put them on you are suddenly able see all the angels who surround you. You are witness to the great battle going on in behalf of you. At times when I’m feeling particularly abandoned and alone, I think it would be neat to catch a glimpse of what God is doing behind the scenes concerning me. I would like to borrow those glasses, even for just a few minutes.

Ironing. Seriously. I enjoy ironing. I find it relaxing and I use my ironing time to watch all the episodes of Law and Order that I’ve taped through the week. I especially like ironing cloth napkins because you can get the crease so perfectly straight.

Anything you’d do but don’t because of fear of pain? What is it? Ex. Bungee jumping, sky diving, running with scissors.

Scuba diving. My husband scuba dives and on trips to warm and reefy waters, I snorkel along the top while he dives way under. I’m afraid of trusting my entire ability to breath to this tank strapped to my back. It’s unnatural, I tell him. Also, I ‘almost’ tried clearing my ears in preparation for even learning this sport, and stopped because I thought clearing my ears might hurt. I simply couldn't get myself to do that. And if you can’t do that simple thing, you can’t dive. FYI – clearing your ears involves holding your nose and gently breathing out through your nose until your ears pop. Yikes, even writing that down is giving me the willies.

I hate it when people write alot when they really mean a lot. I want to scream at them – it’s two words!

Too loud music in concerts. My husband and I love to attend live concerts, but I can’t tell you the number of times in recent years we’ve had to get up and walk out. The music itself might be wonderful, but when it physically thumps in your chest and leaves your ears ringing for days it’s just not pleasant. Movie theaters are even too loud these days. Even some churches are. Do I sound like an old fogy?