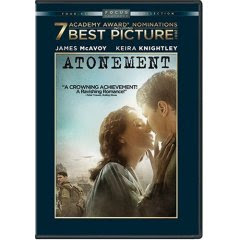 Atonement is a difficult movie on several levels. Emotionally, it's a tale of twisting logic and the power of simple words unleashed. It's a story of what ifs and if onlys. An epic full of longing and sorrow, passion and pain,

Atonement is not a movie to watch to unwind after a taxing day full of drama, unless intense drama onscreen helps you unwind. Though the writing is tight and intriguing and the acting spot-on, the transitions from some scenes to others left me scratching my head.

Several scenes are revisited with different points of view. I also struggled with following a couple of time line events for the same reason. One character ages from ten or eleven to eighteen but the stated time frame is only five years unless I missed a heading telling the viewers of a time change.

I will have to watch Atonement again because I'm not sure I fully appreciated the message of the film. Though Atonement is the title, I'm not sure how this played out throughout the storyline. When it's all said and done, I don't see it. I can't say anymore without a spoiler, so I won't.

Atonement is not going to appeal to the majority of movie lovers. Historical fans may not find enough historical richness though there are plenty of shadows and hints of the times. War epic fans may not find enough though there are strong and poignant war moments. Those who want cookie cutter endings definitely are going to want to avoid it unless in a mood to cry. Fans of tragedy or human character and the study of why people do what they do may really find the most satisfaction.

Sensitivity warning...the war scenes are peppered with the F-word, and a young man pens a note sharing what he'd like to do sexually with the woman he loves and one crude anatomical word is shown several times. Child endangerment and adult-child inappropriateness are an issue early in the movie. A couple are shown in a sexual embrace though much is hidden by clothes and lighting, an assault with a glimpse of nudity as well as a young woman in a white, wet dress add to the need for the R rating. Some war injuries are moderately intense as are the death of some horses.

The acting is the major reason I'd suggest the film. Cinematography and writing would be the secondary reasons. Otherwise, if you are ambivalent, rent before you buy or skip altogether unless you like your stories to go really deep into the reality of cause and effect.
Posted by Scrambled Dregs at 7:05 AM 1 comment: