Serials and Scenarios - Matthew Raley -- On His Toes 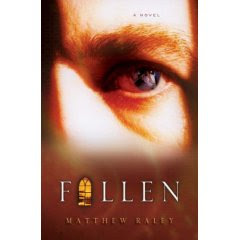 I know you guys think my titles are weird...but no one ever comments. On His Toes -- he wrote Fallen. Ha. Ha.

I totally got his book, and I love what he had to share here and at Novel Journey if you are so inclined. Suppose it's the violin connection?

Oh, wait, that can't be it. He can play his. Now I'm really envious.

Fiction character you would most like to be or most identify with and why?
Mr. Rochester from Jane Eyre. I would love to be that tempestuous and rude and get away with it. I would love to have a dark past. But these things don’t go over well in the pastorate.
If you could ask any person, living or dead, a random question -- what question would you ask of whom?
In the late 1960s, my grandpa traded a lemon ranch with a large white house on a hill in Santa Barbara, CA for a mobile home park way up in the northern reaches of the state. The move resulted in my dad meeting my mom, but also made grandpa seem displaced until his death. I would ask him why he made that trade. I can’t complain, but . . . it was Santa Barbara!
If you could change something in any novel, what would you change about it and why?
I would fire Melville and give Moby Dick’s plot and characters to Ernest Hemingway. Needs tightening.
Favorite turn of phrase or word picture, in literature or movie.
I love almost every word Raymond Chandler wrote. Here he is describing Mrs. Regan in The Big Sleep: “The calves were beautiful, the ankles long and slim and with enough melodic line for a tone poem.”

What period of history intrigues you the most?
1789-1914 in Europe and the United States. Everything we struggle with today, everything we regret, goes back to events in that period—totalitarianism, urbanization, industrialization, the decline of community, total war, secularism, on and on. A writer who captures many of these changes for me is Henry Adams.
What would you write if there were no rules or barriers? (epic novels about characters in the Bible, poetry, greeting cards, plays, movies, instruction manuals, etc.)
I would write essays. There is such a range you can cover in an essay—from the academic to the ordinary, the artistic to the political. I like the cozy proportions of essays, and the limited time investment for the reader. I also like the fact that such a small composition can be memorable.
What makes you feel alive?
Music, art, and literature. I am an aesthete way down to my bones—which I realize is perceived as pathetic, but I don’t care.
How does something worm its way into your heart? Through tears, truth, humor or other?
Truth. Even though I’m artistic, my default mode is analytical. When I see, hear, or experience integrity, I am always struck and sometimes overpowered. For me, truth is the gate to powerful emotions. This is a big reason why the Bible has a hold on my imagination.
Book, music, person, food you would take with you on a very long trip.
My little family—my wife Bridget, and my sons Dylan and Malcolm. I couldn’t imagine not taking them.
Where would you most like to travel ----- moon, north pole, deep seas, deserted island, the holy land or back to a place from your childhood, somewhere else? – and why.
I want to go to an old European city like Vienna, get a place for about a month in an interesting district, and just hang out. I’d people-watch in cafes, lounge in museums, and go to concert after concert.
Favorite season and why?
My favorite is autumn. The light is richer than at other times, the smells heavier. And I love trees, and the melancholy of their approaching slumber.
Which compliment related to your writing has meant the most and why?
At the final stage of the editorial process for Fallen, a reader from outside Kregel was supposed to spot errors. She could also ask about anything that was unclear in the writing. I was so gratified that she didn’t have any questions.
What criticism has cut the deepest and why?
I am cut the deepest when someone shows me that a piece of writing is self-indulgent. What makes a writer great is his or her ability to edify. If I only please myself, then I have committed a writing sin.

I once made a comment on a blog. When my best friend read it, he wrote me that I had totally missed the point of the discussion. And he was right. He made me examine my pomposity yet again.
What would you do today if you knew you had only a week to live?
Make that last sermon a really good one.
What word annoys you more than any other?
Relevant. As in, “Churches need to be more relevant to the culture around them.” It expresses little anymore but the tyranny of groupthink. I think audiences are most powerfully moved by the unexpected—a quality the world badly needs to see in churches.
Superhero you most admire and why?
Batman. It’s all about the look.
Societal pet peeve…sound off.
I’ve had enough of the casual thing. It’s boring. It obliterates any sense of occasion. It looks terrible. It’s conformist. The casual thing is nothing but communism. The time has come for men to burn their freakin khakis and assert their individuality as gentlemen. [Cue crickets.]

CREATIVE CORNER:
Pick any of the following and have fun with it.
Pick a Genre - Describe a kiss….
Suspense
The breeze carried a single brown hair from her shoulder to his cheek. She pulled it back toward her and they continued staring into the dark. He sighed. Would they ever stop running? Was there any place on earth the cranberry smugglers wouldn’t find them? Why had he finally met the right girl, only to draw her into a fight with the most ruthless fruit terrorists in Western Massachusetts?
He turned. “Bertha—” He could almost feel the dead stare of the cameras scanning the bog. He felt that everywhere he looked were the red dots of camera eyes, tracking them. He no longer cared.
He took her by the shoulders and she looked into his eyes, but snagged her new melton wool jacket on the rugged fence post . . .

Thanks, Matt. It was fun. Can't wait for the next novel.

Happy Weekend!
Posted by Scrambled Dregs at 5:10 AM 1 comment: