Scribbles and Scrambles ~ A Headache Induced Twist of a Profound Concept 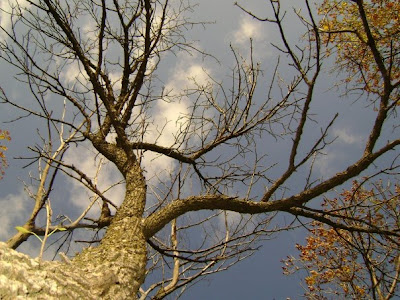 I've been pondering a conversation for several hours.

Of course that contemplation has been interrupted a few dozen times by random and bizarre things so my mind is pretty much an-end-of-a-long-day-sieve right now, but I'm going to attempt to share it with you, too.

My friend mentioned that she'd had a conversation with a relative about the family tree.

We all have nuts in our family trees, or bad apples, if you'd prefer.

The person my friend chatted with complained about the way a parent behaved.

She said she understood and could see where that situation/quirk would be difficult. But then she went on to share the thought that stuck with me.

The attempts made at healthy correction were likely the best that person could do given what they had to work with.

I won't use the example she shared but I'll make one up. Great Grandma A's father was a gambler. The household was never secure, her mother scrambled to save every penny and then hide them. Great Grandma A willingly chose to never be controlled by an out-of-control husband. She married a workaholic with the tendency to throw money at problems. Great Grandma A made a better choice, in her opinion, because her life bettered from what she grew up in, insecurity.

Great Grandma A's daughter, Grandma B, considered her parents materialistic and shallow. Problems were "solved" by her money flinging father and a mother who accepted this wealth band-aid. So Grandma B would choose differently. Instead she would not marry at all. What was the point in having a shadow of a father and a marriage based on money's fleeting affections? She bought a slice of land and created a world untainted by the world. Living completely off the land, she kept money at a distance, and men as well. Except for one. But just for procreation. She and her daughter,Mom C, were just fine, the two of them living in a man-free and untainted-by-money-nirvana. However, Mom C hungered for a father figure and married young. He was charming and affectionate and met her needs. However, he was a bit of a dreamer.

Then comes the current generation with 20/20 hindsight. The here and now. The mini or major corrections that each generation made to compensate for the unmet needs they had in their home of origin has shaped the entire family tree.

My friend's profound point was that most of us do what we do with good intentions and out of our warped reality. And maybe, if we just took responsibility for our choices and let go of perfectionistic expectations of others, maybe, just maybe, we'd have better relationships.

What do you think?
Posted by Scrambled Dregs at 7:38 PM 3 comments: