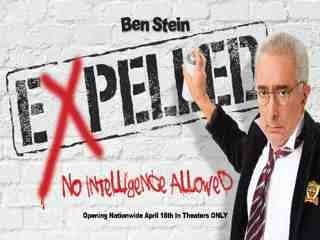 My Review of Expelled:

I expected to sit through a documentary that would be a little scientific for my taste, and dry to the point that I'd zone out and visit my happy places during the inevitable lectures.

I didn't expect to experience the degrees of emotion I did or find the movie to be so well done that I only have two minor complaints.

The buzz over Expelled had me curious and wondering what kind of chopped up snippets of conversation I might run into or how many unauthorized songs and words would be within.

I'm going to start with my complaints and build on them. Some of the interviews included background instrumentals that wrestled with the dialogue, and a segment of live footage resulted in annoying choppiness bordering on motion queasiness. That's it.

Now, for the complaints of others.-- Expelled is filmed with an agenda. That's the point, ala Michael Moore and Al Gore who went before Ben Stein. And every talk or interview program, talk radio, newspaper or magazine editorial and feature, politician...well, I think you get my point. If you are enraged by the idea of someone investigating further into The Theory of Evolution vs. The Theory of Intelligent Design, this documentary will further infuriate you. If you fall into this description, I recommend you pass.

For the curious or those who wonder "why all the fuss" by all means, see it. Stein's investigation uncovers a school of thought that in the extreme and natural course becomes terrifying when compared to where we've been and what we've seen historically.

I can't imagine that the folks that Stein interviewed were ignorant regarding his stand on the issue of Evolution vs. Intelligent Design. If they were, then they didn't do their homework and maybe, in that case, should have been less forthcoming and a little more cautious with their words. And unless I missed something, exactly two lines were used from John Lennon's Imagine and the words were clearly attributed to Lennon.

There were several sections of longer interviews and then shorter one question, one answer moments with experts on each side of this huge debate able to share their thoughts and opinions. Interspersed are historical film snippets, both thought provoking and quirky, graphics and an animated cell sequence that was stunning. Stein provided a handful of laugh-out-loud moments with his quirky behavior and snippets of commentary which added a softening to the heaviness of the film's subject matter.

I thought long and hard after watching Bowling for Columbine. I appreciate Moore's passion for what he feels is wrong with America, and I was able to overlook the moments his liberalism stepped on my toes. I hope the scientific and academic communities and politically liberal will be able to do the same with Expelled.

Why on earth would anyone want to suppress science, truth or a mind that can reason, calculate and choose?