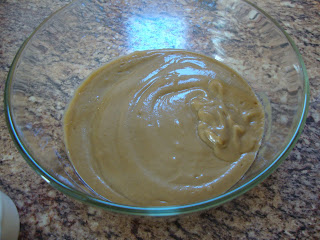 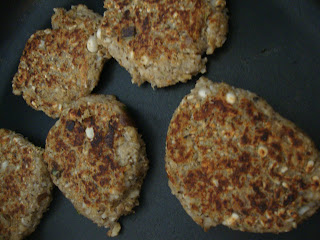 I'm going to dub this burger the Kitchen Sink Burger...because I think you could put just about anything but the kitchen sink into it and end with a tasty result.

I had some sauteed vegetables on hand. And a soup. The soup was a fail. Okay. That's strong. It wasn't a fail, it just wasn't the best. A little sour but kind of lacking in taste. It contained potatoes, sweet potatoes, lemon, chard, white beans, garlic, cauliflower and vegetable broth. And it was actually a recipe I followed that was so-so. And I added several bits of leftovers to it to increase the flavor...and it just wasn't happening. I've frozen soups like that in the past for future use, hoping to revive them with more flavor down the road. But this time I had a brain storm. I was starving and I wondered if it couldn't be a building block for a burger.

KITCHEN SINK BURGER
1 cup of creamed soup. Take whatever chunky soup (or sauce) you want to use up, dump it in the food processor or Vitamix and liquefy it. I ended up with several cups which I froze for future use. Think along the lines of the flavor family in your soup because with that flavor base you will pick your bean..
1 can cooked beans (drained) (1 2/3 cups of cooked beans if you make and freeze your own. I used white with this recipe. (If your soup/sauce is salsa style, use black, Middle-eastern based soup, use lentils...etc.)
1 cup leftover or sauteed veggies. (I used onions, garlic, mushrooms, spinach)
1/2 cup oatmeal (or grain of choice either cooked or soaked if you aren't using oatmeal)
1/2 cup nuts of choice
1/2 cup gluten flour
(If your soup was flavorless you could add a bit more spice now. Like a teaspoon of garlic powder, 1/2 teaspoon salt, fresh ground pepper, cumin)


The soup is already in your food processor. Add all the other ingredients except the gluten flour. Whir. Not too much, but so it's a nice even texture. Add the flour and knead for a few minutes.

If you need an easy and delish bun recipe, here's one.
Posted by Scrambled Dregs at 5:27 AM No comments: