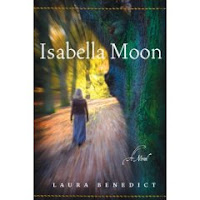 It's so hard for me to turn down an opportunity to review a good book, and to ask nosy questions.


Some out there in writing land have strange rituals. Share yours.

I do everything else, first! Actually, I make sure the hummingbird feeders are filled (in season) because they’re right outside my office window and give me something fun to watch when I’m thinking. Then I get online and read the gossip on Page Six. Then I do email and MySpace for about ½ an hour. Then I’m ready to settle down and write.

I would really like to know the name of the narrator/heroine in “Rebecca.” That really bugs me—I felt like du Maurier was being coy. I confess that the first time I read the novel, I didn’t realize until I was halfway through that I didn’t know it!


What crayon in the box describes you on a good day? Bad day? Which one do you aspire to be?

Purple cow. I like cows. Isn’t that like an image from an old commercial or something? Maybe an ice cream drink? The thought makes me smile.


Favorite turn of phrase or word picture, in literature or movie.

Jane Eyre’s view of the ruins of Thornfield when she returns to Edward Rochester. Either in the novel or the Olivier film.

Non-fiction. I would tell everyone else how to raise their kids! Or, I would just republish the Bible.

There isn’t a period that doesn’t intrigue me. But I would only want to live in a time with reliable dentistry!

I think a writer has to write as though there were no barriers. All the best writing has that quality.


What makes you feel alive?

Jumping on the trampoline with my eight year-old!

I am the world’s softest touch. Therefore I avoid all dog movies, Lifetime dramas and “Chicken Soup” books because I would just cry and cry. Really, though, heartfelt truth does it best.


Book, music, person, food you would take with you on a very long trip.

I’m never without food. My husband jokes that even when we travel he can say, “Oh, I’m hungry for a ham sandwich with cheese and mustard. No, no mustard.” And I say, “I have that!” When I travel for work, I always pack cashews, water (darn the TSA—have to buy airport water!), chocolate, an apple, mints, and Goldfish crackers. I also take my ipod with Chopin and Diana Krall and Johnny Cash. Books? Whatever I’m currently reading-often friends’ books. One Person? My husband!

Wow! So many possibilities! Scotland’s at the top of my list right now.

If we’re talking childhood, probably my grandmother’s house in Cincinnati.


Favorite season and why?

All, really. I would never want to live anywhere that I couldn’t experience them all fully during the year.


Favorite book setting and why?

England between the wars. I want to meet Bertie Wooster and Poirot!

My aunt told me how proud she was of me, and that my grandparents (now deceased) would love my work, too.


What criticism has cut the deepest and why?

Any unconstructive criticism is hurtful. I’ll leave it at that. I do my best to leave that sort of thing far behind me….

Pray. A lot. Hang out with my kids. Make sure they had clean laundry. Show my husband where we are in our finances. Go on a date with him. Tidy my office. Cry.

Fart. (Did I mention I have an eight year-old?)


Superhero you most admire and why?

Robin. He had to take a lot of guff from Batman but still stood by him.


I already have a super power. I have the ability to irritate critics at 1000 miles!

Isn’t that an oxymoron? ; )
Actually, I’d have to go with filling the bird feeders. I feel like Mother Nature!


Anything you’d do but don’t because of fear of pain? What is it? Ex. Bungee jumping, sky diving, running with scissors.

People who don’t know the difference between the words lie, lay, and laid. And those who misuse “I” and “me.”

Pick a Genre - Describe a kiss….

“Lisa, we have to consider the ramifications of this,” Robert said.

“What ramifications?” Lisa said. She lay back on the pillow. The moonlight highlighted the indentation her glasses had made on the bridge of her nose.

“Bodily contact is not the only thing we need to be considering.” He bent over to remove his socks. They were handsome pinstriped socks, given to him by his first wife. Her ashes still sat in the urn on the mantle in the library. He wondered if Lisa had noticed the urn, wondered what it contained. “There may be existential consequences. Consequences that may affect the way we respond to global climate change.”

“I understand, Robert,” Lisa said. “Really I do. Please come here.” She lifted her arms out to him as though she were a child looking for reassurance.

He came and sat down beside her, but would not rest in her arms.
When she touched his back he began to sob.

“Oh, Robert.” She sat up and stroked his hair and kissed his unshaven cheek, knowing that in the morning she would be gone, and would have to admit to her sister, once again, that she couldn’t make a margarita worth a damn.


And now for my review of Isabella Moon.

I've read and reviewed so many books this year, several of them run together in my mind. Isabella Moon will be one that sticks with me.

I'm going to warn all readers up front since a lot of the titles I review are from Christian publishing houses. Isabella Moon contains language, sex, drugs and supernatural elements that may offend. Use the same care you would when choosing to watch an R-rated movie.

Laura Benedict is a writer who does it all well. A fast-paced twisting plot blends with moments of crystal-clear sensory detail, some grisly, some beautiful and some a varying combination of both. Benedict is a sensual writer, so much so some of her images are burned in the back of my mind, not unlike those scents that pull me into a memory, or evoke strong emotion unexpectedly. One scene, in particular, is a work of art. Benedict uses fragility, poignancy and regret like some artists use oils or clay.

Each character is fleshed out uniquely though they are recognizable characters in small town America. Beyond some moments of voyeuristic embarrassment while reading these characters' lives, the only issue that bothered me was the occasional shift or lapse into omniscient point of view. And that's my issue, many love to know what's going on in more than one character's mind.

I didn't experience moments of terror as I was afraid I might based on the subject matter, instead I mourned, grieved and wanted to warn the characters as their lives intersected and permanently marked each other.

Those who love supernatural thrillers, mysteries and crime dramas will likely find much to like in Isabella Moon.
Posted by Scrambled Dregs at 1:26 PM 1 comment: