End of Vegan Mofo. I would love to tell you I have a four course gourmet spread for you. But. Since I've spent the last few hours engaged in overshared, overdramatized activities below, I'm not cooking for ya. Trader Joe's to my rescue, and a recipe I created a few months ago and promptly forgot about to save the final day of Vegan Mofo. 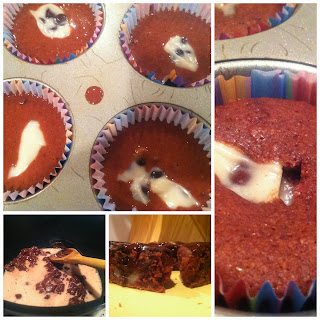 Changing the cat box. Not that this isn't a regular thing. But sometimes I wonder whom owns whom, Feral lets me know in loud protests when he's hungry, when his litter is not conducive to his comfort and when it's time to go to bed. And I basically do as instructed.

Forgetting and then PAYING for in blood, sweat and tears, my online password to my stupid cell carrier because I want to make a temporary change. Yeah.  Two hours later, with breaks for crashing my head against the wall, I've gotten pretty much nowhere. Now I somehow have two user accounts though.

Wacky Surprise Cupcakes or Cake - this isn’t an overly sweet cake, more grown up in taste, but as decadent as you want to make it.

Makes 12 cupcakes or one 8 x 8 pan. Either line the cupcake pan with paper liners or lightly grease the 8 x 8.

In a medium bowl mix the following:

Mix this all together with a fork or spoon. Then make a well in the middle.

Pour into the pan or equally into cupcake wrappers, approximately 2/3’s full.

Set the pan aside.

Spoon spoonfuls (about a teaspoon each) into the middle of each cupcake or in 12 blobs on top of the cake in the middle of the slices you’ll be cutting.

If you are going to want to frost the cupcakes with cream cheese frosting, keep the cheese and sugar and vanilla out and use the bowl when you are done with the filling.  (When your cupcakes/cake are in the oven mix 4 ounces cream cheese, 1 to 1 ½ cups powdered sugar and a ½ teaspoon of vanilla together until you reach the desired consistency. Put it aside for use when the cupcakes/cake cools. )

Place the cupcakes in  the oven and bake for 20ish minutes. You want a knife poked into the cake to come out clean. If you hit the goo, it won’t look clean. The cake tops also lose the glossy shine.

When the cupcakes/cake are/is cooled you can frost them. Either use a vegan cream cheese frosting. (Above). Or make a lovely chocolate ganache.

3 TBSPs of non-dairy milk in a small saucepan. Watch the milk you want it nice and warm, but not scorched. I used vanilla flavored almond milk, so feel free to use flavored milk, or creamer of choice. A mocha ganache would be tasty. When the milk is warm remove it from the heat and add...
¼ cup of vegan chocolate chips

Stir until the heat from the milk completely melts the chocolate and turns it into a velvety delicious chocolate dream.

Spoon the mixture over the cake and spread it with the spoon so the entire cupcake (or most) is covered in glossy chocolate.

Posted by Scrambled Dregs at 1:16 PM No comments: