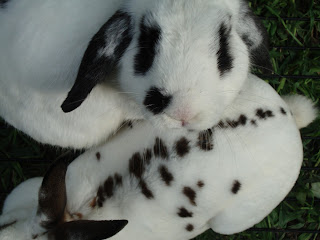 Here’s a story. One about how I now have two Jane Austenesque bunnies at my house.

It might be an enchanted fairy tale. If nothing else it might be the picture of the power of prayer. Odd as it is, it is true. Very, very little embellishment. (I know. From me?)

About a month ago & and I headed out at dusk to walk the dogs. In front of us, in the weedy ditch, we saw a hopping little animal. The girls saw it as well and were very interested. Knowing it was a bunny we were ready to wrestle the girls past the little critter when we both noticed that there was a whole lot of white on that bunny.

Turns out the bunny we saw looked nothing like the traditional brown bunny in our areas. It looked very much like a cute little pet bunny.

But, why would a cute little pet bunny be out and about? We thought perchance we had made a visual error as it disappeared into taller grass.

A few days later we saw a white bunny in the neighbors yard. Chewing contentedly, just hanging out. Had to be the neighbors bunny. Right? Of course it was. And it was most definitely a domesticated pet bunny. Indeed, the little cutie was a mini-lop if I've ever seen one.

And a few days later, we saw him again. Never in the light of the day but always when heading out for a late evening walk. We still wondered why the bunny didn't have a cage, but, well, he clearly was home.

Then we saw a wee bit of a difference one evening. He was suddenly a white pointy-eared bunny. Two bunnies?

One morning both bunnies visited our yard. Brace yourself for a scary moment that ended with no casualties. Imagine a cartoon visual of a large black dog racing after a small white critter, back and forth, back and forth. Yep. That's what I saw the morning I realized the bunnies had begun visiting us. Fortunately for all of us the driveway has a bunny-sized tube and Lily is not bunny-sized.

At this point we began to wonder if these bunnies really did belong to the neighbor. And if so, why they were out and about, unprotected by fencing. So I called. No answer. And we had to leave for a long weekend away. & began to pray for the bunnies protection. And that when the time was right, if the bunnies were not the neighbors that she could catch them and find them a good home.

This pattern continued. Until Monday night. We had gone out and as we arrived home we saw both bunnies in the neighbor's yard. Our fake extended-female-family-members were with us. Two of the more exuberant ones jumped out of the car and ran down to see the bunnies. We followed as did the neighbor who was no doubt curious as to why there were strange teenagers/young adults running willie-nillie in his yard. We chatted. The bunnies had just shown up one day and he thought that maybe they were ours. He was worried about them getting into traffic and wildlife encounters of a bad kind.

Now. We decided we must try to catch them. Indeed, it is probably a miracle that they both survived. There are two busyish streets and raccoons, badgers, owls, hawks, dogs, cats, goodness, there is danger out there. We couldn't just leave them to try to survive any longer on their own. We know lots of people who love bunnies and would love to offer foster care and a friendly home for the cuties.

Shockingly, we did indeed catch them. And they are tame as can be. And dog-gone it (as Rob expected the entire time we worried about the bunnies) we became the welcoming, friendly home.

Now could you resist these faces?
Posted by Scrambled Dregs at 5:44 PM No comments: