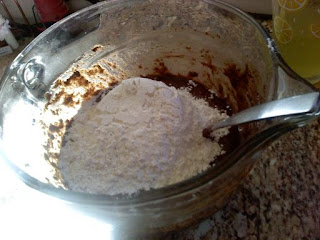 My quest has been to replace the go-to brownie from the bad days of eating. The measuring stick is tough to compete with....this particular brownie has been my recipe for when I needed to make THE ultimate smack-down taste sensation. It's been tweaked over the twenty years I've used it. Not much though, just a bit. The original recipe called for butter, eggs, melted bittersweet chocolate, vanilla and resulted in a crusty brownie so gooey in the middle, so chocolatey, so delicious in all it's buttery chocolate goodness that no one even CARED how awful it was for the circulatory system. 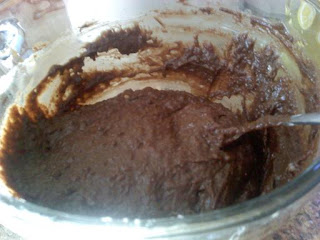 This weekend required a little flexibility in the Vegan eating routine, and I've noticed that the more I eat less than clean, the more I want to eat less than clean. I do pay for it. I feel like a slug... UGH when I eat dairy. But there are just times I make that choice.
So Monday hit hard. And the craving for Chef Buttah Brownies resurrected and started following me around like an annoying zombie.
Then it occurred to me to take a look at THE recipe and see if I could Veganize it.
And by golly. I think it worked. Rob says it's a keeper. 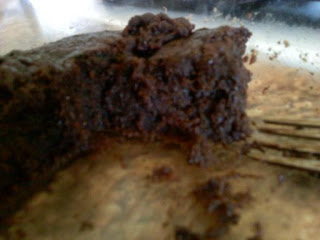 He said he couldn't tell they'd been tweaked or messed with. And, well, they weren't the full of BUTTAH brownies I remember from the past, but they are close. Close enough that I may consider this quest closed and I almost feel like screaming "SCORE!!!!!!!"
VEGAN "CHEF BUTTAH" BROWNIES
Lightly grease 8 x 8 pan.
3/4 Cup cocoa
1/2 Cup applesauce
1/2 Cup plus 1 TBSP water
3 TBSP ground flax seed
3/4 Cup Vegan fat source. (I used 1/2 cup coconut oil and 1/4 Earth Balance, if you don't like the faint taste of coconut you might want to reverse that ratio or use all Earth Balance.)
2 tsp vanilla
1 and 1/2 Cup Vegan sugar (yeah. And that's reduced...maybe could be tweaked a bit more.)
1 Cup Flour (I used whole wheat pastry flour).
Optional 1 Cup chopped nuts or you could add chocolate chips and go for the complete and total chocolate overkill.
In small container mix water and flax seed. Set aside. In bigger bowl mix Earth Balance/Coconut oil and sugar together until creamed together. Add vanilla and applesauce. Mix well. Add the Flax mixture and cocoa. Mix well. Stir in flour.
Scrape mixture into greased 8 x 8 pan. Bake at 350 for approx 30-35 minutes. These will be gooey, but they will continue to set up after you take them out of the oven. (You can double the recipe and bake it in a 9 x 13 but will need to bake it for about an hour or so.
Posted by Scrambled Dregs at 3:53 AM No comments: