I can't believe it's October. Where did the year go? However, it has been a BEAUTIFUL October so far.
:  )
Sunshine and cool breezes. I still am gathering a tomato here and there.
Saturday was busy. A wedding and a Family Fun event at our church. Sunday brought a flurry of cooking activity and planning for the week. As I write this (on Sunday night, pretending it's bright and early Monday morning....gotta love auto post.) I'm cooking up a huge batch of homemade vegetable broth. 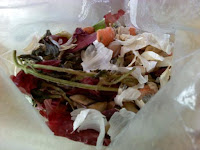 At the wedding I avoided all that was not Vegan. Even the cake. (You should all be clapping for me, that was a big deal!). They had a platter of fresh fruit so I scarfed some of that, and was prepared enough to eat dinner before heading to the wedding. The Fun event at church included all sorts of stuff I didn't eat, too. But, those two events did plant a need for some sweet noshing. Sunday's cooking adventures included two cookie recipes. (and the eating of a few of those little yummers.)
I also tried my hand at boiled Seitan. I'm currently "reading and drooling" through Vegan with a Vengeance, The Kind Diet, Peas and Thank You and the newly arrived Another Fork in the Trail. I've prepared baked Seitan which has been decent to good, but it's a little hard to cut. Vegan with a Vengeance had a boiled version, one the author Isa Chandra Moskowitz has perfected. So. I tried it. 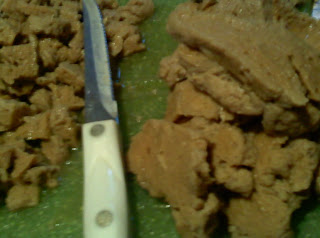 I used water instead of veggie broth for the broth because it called for 13 cups of broth or water. Yikes. That's a lot of cups. I was also out of tomato paste so I used Vegan organic ketchup.  I didn't take a picture while it was cooking or after I added the liquid. Trust me. You don't want to see it. It was UGLY. Think alien or body part ugly, and after the whining about mother's state of appearance I just couldn't do it to you. You are welcome. It looked so freaky that I had to watch a few YouTube "Making Seitan" videos to see if I had done something wrong.
I guess Seitan is just ugly. But this version tastes pretty close to the Trader Joe's version we really like and gave me at least 5 meals worth of meat substitute. It wasn't too time consuming when it's all said and done and I think it will be pretty flexible overall. So. It's a keeper. 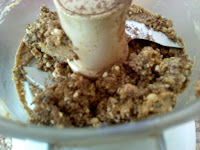 As far as the goodies. Chocolate Covered Katie posted a must try chocolate peanut butter no bake cookie. Halfway through the simple recipe I realized that I only had a teaspoon of cocoa. I had to grind up a two tablespoons of chocolate chips to make it work. I think this recipe is an amazing use for raisins. Katie knows her chocolate.
Posted by Scrambled Dregs at 4:41 AM 2 comments: