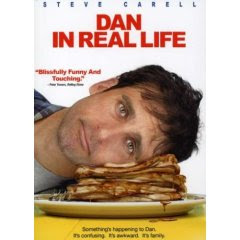 My thoughts. Click on the picture and go to Amazon and read 93 more reviews, if you'd like. I gave it 4 stars.


Almost as awkward as a coming of age story, Dan in Real Life, is full of sweet and grief filled moments. Steve Carell plays Dan, a parenting columnist who has single parented three daughters since his wife died four years earlier.

He and his daughters pile into the car and head to Rhode Island to the family summer house. The cabin, full of brothers, sisters, nieces and nephews as well as his parents is a place where Dan can be himself and be humbled in the process. Carell plays grief-numbed very believably. I thought it might be difficult to separate him from Michael Scott, but other than flashes of Michael, Steve played Dan, and I bought into it.

On day one with his extended family, Dan is chased away from the cabin by his mother when his daughters reveal togetherness tension. While away, Dan meets a woman and bares his soul.

There are some touching scenes, humorous moments and a celebration throughout of family in all its warty importance. The familial interaction feels real. Of course, I come from a touchy, feely, in your face family. Some from hands off homes may struggle with the intimacy of the group.

There is some predictability. Juliette Binoche plays Marie, who except for a few glimpses of emotion doesn't come across as right for Dan. But then, that's often the way friends and family see couples, as mismatched.

Overall this flick is heavier than a first date movie or feel good romance and definitely worth looking into further.
Posted by Scrambled Dregs at 5:07 AM No comments: