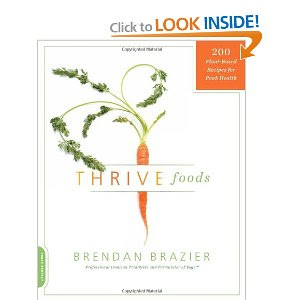 From the Author
In the Thrive Foods, I introduce something called the Nutrient-to-Resource Ratio, which considers the amount of each natural resource that goes into food production in exchange for the amount of nutrients that food offers. Based on these findings, I then make suggestions as to what foods are most beneficial to personal health as well as environmental preservation. The goal is simple: get as high a level of health-boosting micronutrients from food, while expending the smallest amount of each natural resource to do so. (Essentially, it's a mathematical way of saying plant-based whole foods make a lot of sense). There are also 200 recipes, including a few from my favorite North American restaurants, as well as a few of my favorite chefs.

About the Author
Brendan Brazier is a former professional Ironman triathlete and the creator of VEGA, an award-winning whole food product line. Recognized as one of the world's foremost authorities on plant-based nutrition, Brazier is a guest lecturer at Cornell University.

My Thoughts:
I haven’t checked out Brendan Brazier’s previous two books, but, since my public library had Thrive Foods, I did indeed check this one out.
Brazier’s why to go plant-based is very compellingly presented. He has done some serious homework. The first 100 or so pages of Thrive Foods is focused on the realities of nutrition and why the Standard American Diet is not a recipe for health. Brazier then tackles what animal products contribute to (or actually take from) the environment. He offers solutions. I.E. go plant-based, and he offers the how to do that. Finally, in an attempt to “boil down” foods to the most nutrient rich/best overall choice he’s come up with a formula. Now. I’ll be honest. Though I was intrigued with this formula and the end result, my inner math-phobe rebelled a bit and I went into my high school math class induced happy place. But, since I've matured and survived radiation math I pulled myself back out and decided I needed to learn what he was patiently teaching. It's fascinating and horrifying. His top Thrive food choices added a positive spin after the bad news, so I ended up feeling hopeful that one person, one choice at a time, does make a difference. I was also thrilled to see that many of his go-to power foods are ones we already incorporate into our lives. He introduced me to several more.
Finally, Brazier offers loads of recipes, some his own that are tried and true. Others from chefs and restaurants he respects. Most of them sounded delicious. Brazier makes his own sports drinks and bars. And his athletic abilities prove that his diet is indeed part of making him the machine that he is. Since my time with the book was short-lived I didn't actually make any. However, these are the recipes I want to try. His Lemon-Lime Sports Drink, Kombucha Mojito, Candied Grapefruit Salad, Cream of Asparagus Soup, Energy Bars and Gels, Roasted Garlic Quinoa, Rustic Sweet Onion Flat Bread, Bok Choy Couscous with Sacha Inchi, Live Falafels, Live Seasoned Cashew Cheese, Live Cashew Sour Cream, Pecan and Dill Pate...okay. I want to try a lot of the recipes, and I'll be buying the book.
Alas, now the library version of Thrive Foods has to go back to the library.
I recommend this book to those who really want to go the next step from whatever diet they eat into whole food veganism. Athletes or manly men who wonder if they can find enough protein in plant food to survive and thrive should also check into Brazier’s books. Newbie or transitioning from standard Vegan to whole food Vegan would benefit from this book as well. It's also going to be a great resource on what foods are the richest Thrive foods and how to prepare them. Folks who just wonder if a Vegan lifestyle is realistic, contains what the body needs, or palatable might want to score a copy. Finally, if you are eager to green up your life and reduce your carbon footprint, you should find his calculations fascinating.
Posted by Scrambled Dregs at 2:58 PM 2 comments: