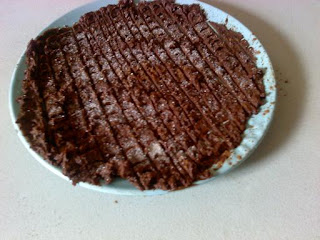 I'm not going to say these are easy. I've never met a real deal cinnamon roll that was.

However, I can tell you that these have decreased fat and sugar, have whole grain, and are Vegan....and delicious. If you like cinnamon rolls.

My first attempt was a keeper, however, as a family we decided to add more frosting, a bit more sugar, and more filling. Those additions will take these into Oh My! land. And they are good warm from the oven, and at room temperature the following morning. Yeasty, chewy sweet. Sigh. 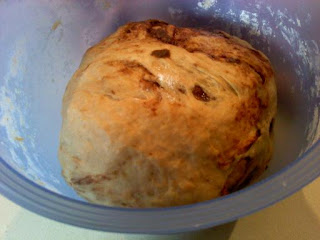 Step one. Cinnamon chips for the dough.

Spread out on parchment paper. cover with a sprinkling of a mix of 1 tsp cinnamon and 1 tsp sugar.

Slice the "chips" with a sharp knife in a grid pattern. So you'll have lots of little squares...about the size of a crossword puzzle.

Place the batch into the fridge until needed.

Mix 4 cups of the flour, sugar, salt and yeast in mixing bowl and set aside.

Heat milk and coconut oil in microwave, in a warm oven or over double boiler until mixture is warm and the coconut oil is melted. Add vanilla and lemon juice.

Pour wet mixture over the dry ingredients and mix until moistened.
Add flax eggs and stir.

Add the rest of the flour about a 1/2 cup at a time, kneading dough until well mixed. This takes only a few minutes, the dough will still be slightly sticky. If you find it too sticky just add a bit more flour, a tablespoon at a time until you can handle the dough easily. When dough is ready to rise, scrape the cinnamon chips into it, and knead into it, until the cinnamon permeates the bread. They will break up, don't worry. It'll become more like flecks of cinnamon when you are done.

While this is rising make the filling and the icing. 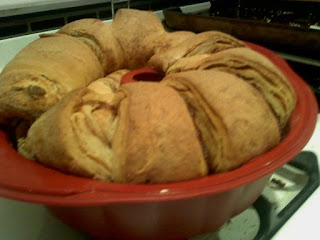 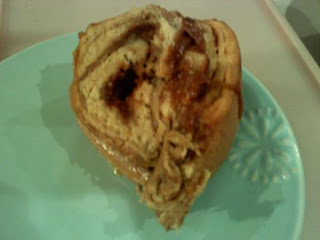 When dough is doubled split it in half. Roll into a flat rectangle approximately 8x14. I rolled mine twice. Once and then folded the ends in so it was folded in thirds, turned it and rolled it again. Take 1/3 of the applesauce cinnamon mixture and spread it onto the dough and roll it into a long pinwheel snake. Start at the long side 14" side closest to you and head toward the other long side so the filling spirals.

Slice into approx 10-12 slices. Place these side by side in a greased bundt pan. (cinnamon spiral next to cinnamon spiral) Use 1/3 of the cinnamon applesauce mixture and spread over top. Do the same with the other half of the dough. Slightly off center the rolls, example, put the new chunk overlapping the slits on the bottom row. Let the dough rest for 25 minutes or so. It will rise again. Not quite double.

Put into a 325 degree oven for 40 minutes. If your top begins to look too browned, cover with foil. Cool approx 10 minutes. Place 1/3 of the frosting on the rolls in the bundt pan so the frosting melts into the bottom. Cool an additional ten minutes and then turn out onto a platter and frost the top and partially down the sides. If you need to, add some non-dairy milk to make it thinner. Slice this into thin slices so every gets a layered cinnamon roll cake slice, or use it as pull apart and every one can grab their own cinnamon roll of choice.
Posted by Scrambled Dregs at 6:37 AM No comments: