Deeanne Gist, the bestselling author of A Bride Most Begrudging and The Measure of a Lady, has a background in education and journalism. Her credits include People magazine, Parents, and Parenting. With a line of parenting products called "I Did It!® Productions" and a degree from Texas A&M, she continues her writing and speaking. She and her family live in Houston, Texas.

J. Mark Bertrand has an MFA in Creative Writing from the University of Houston. After one hurricane too many, he left Houston and relocated with his wife Laurie to the plains of South Dakota. 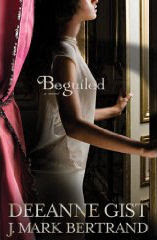 In the shadows of Charleston, someone is watching her... Rylee Monroe, a dogwalker in Charleston's wealthiest neighborhood, never feared the streets at night. But now a thief is terrorizing the area and worse, someone seems to be targeting her.

Reporter Logan Woods is covering the break-ins with the hope of publishing them as a true-crime book. The more he digs, the more he realizes this beguiling dogwalker seems to be at the center of everything. As danger draws ever closer, Logan must choose: Chase the girl, the story, or plunge into the shadows after the villain who threatens everything?

If you'd like to read the first chapter of , go HERE

Check out their video:

Two authors with very different voices and genres have combined their skills and created a nearly seamless read that kept reminding me of the movie version of Midnight in the Garden of Good and Evil.

Characters crafted in the style of classic detective stories fill in the background and intensify the plot as we enter the life of Rylee. Rylee, a beautiful onetime would-be grand lady of Charleston now lives in a rat-trap of an apartment and walks dogs to pay for a luxurious nursing home for her only living relative, her grandmother.

Rylee's parents left her with few resources and in need of help from her father's former law partner. An "older brother," the partner's playboy son, begins to turn his attention toward the all grown-up Rylee in a whole new way, think the movie Sabrina. Meanwhile items, strange items, begin to disappear from Rylee's clients. The Robin Hood thief takes one less valuable treasure, ignoring many worth thousands more, then he donates it to a charity. Soon, circumstantial evidence makes Rylee a suspect.

Reporter Logan Woods is writing about the notorious Robin Hood thief. But Robin Hood is only one of the colorful criminals throughout Charleston's history. His research leads him to the possibility of a contract for a book. But, his involvement in investigating the crimes leads his heart toward Rylee.

Full of fleshed-out characters and plenty of romance and suspense, this novel is a terrific marriage of the talents of Bertrand and Gist. A very enjoyable and touching read with loads of color, fascinating detail and dimension.
Posted by Scrambled Dregs at 1:30 PM No comments: