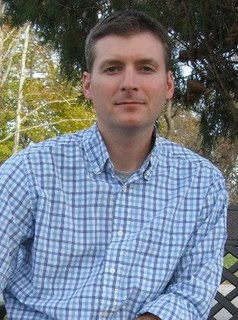 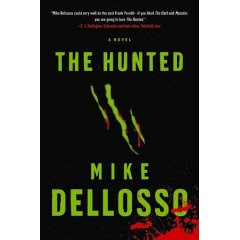 As promised, Mike dropped in for a spell and gave us much for our reading pleasure.

If you like thrillers, don't forget to read the first chapter of The Hunted.

Most like to be: Peter Pevensie, C.S. Lewis’s Chronicles of Narnia. To be High King of such a magical place like Narnia . . . are you kidding?

I don’t have a very substantial attention span, one of the reasons I write suspense (keep it moving), so when I write—when I have a solid block of time, that is—I usually write for forty minutes to an hour then need to get up and move. And when I move, man, I move. Put a little Toby Mac or Decemberadio in the old CD player and get my groove on. It’s a good thing I’m normally alone because it ain’t a pretty sight. I’m a snowball through and through and have no rhythm. This’ll go on for maybe fifteen minutes before I dance myself out then I sit my butt back down and I’m good for another hour or so.

What color is periwinkle? I’m so terrible with colors. Is it like a blue color? Anyway, I’d go with the iguana because the poor thing is obviously embarrassed and I can empathize with that. I’m a blusher too.

Movie: Napoleon Dynamite, Uncle Rico wows us with his wisdom when he says, “You might as well do somethin’ while you’re doin’ nothin’.” I love that. Great stuff.

If you were assured of writing a best-seller, what genre would it be? Give us a sliver of information, a characteristic or glimpse of a scene.

Actually, it would be in general fiction. I love writing suspense, don’t get me wrong, but we’re talking bestseller here and right now I’m battling cancer and would love to write a book about a guy wading through this valley, trying to find meaning in it all while he touches the lives of others and is, in turn, touched by their lives.

World War II all the way. The dedication, patriotism, bravery, and courage of our fighting men just awes me. My grandfather was in Italy during the Anzio beach landing and it wasn’t pretty. Those men (and women) sacrificed so much and our world is still reaping the benefits. They are my heroes.

I would write a novel in the form of an instruction manual. Not really. I would write just what I’m writing now, suspense with a supernatural twist.

Walking along the rocky coast of Maine, the salty breeze dampening my skin and tangling my hair. The smell of the north ocean, the chop of waves, the sound of water against rock. It’s invigorating.

Usually through sentiment. Songs will do it (most anything by Mercy Me, Casting Crowns, Michael W. Smith), as will a Bible verse I’ve read umpteen times but this time it hits just right, you know what I mean?

Book: Anything by Dean Koontz. Love him. Not, like, really love him, just love his work.

Music: Toby Mac. I could listen to him over and over.

Person: Dean Koontz. I’d love to pick his brain, delve into that wealth of knowledge.

No way the moon, too barren. Weird. Too cold at the north pole. Deep seas? Ain’t gonna happen—ever since watching Jaws. Deserted island? Why? It’s . . . deserted. The holy land would be intriguing but too dangerous for my cowardly taste. I’d love to go to Scotland or Ireland. So . . . green, yeah. I also love sheep . . . and castles.

Definitely autumn. The crisp air gives me life. I could stare at a colorful hillside all day. The memories of childhood plunges into mountains of leaves brings tears to my eyes. Yeah, autumn is fallbulous . . . how corny is that?

I’ve never landed one of my stories here (yet) but it’d have to be Maine. The landscape is so raw and rugged. The people so unique. The lifestyle so hard. The dialect, the quirky culture, there’s so much you can do with that combination.

This is weird but when someone tells me one of my stories gave them nightmares I count it as a great compliment. That’s so mean, isn’t it? Also, when someone says they couldn’t put the book down. That’s a great thing for any writer to hear. Keep ‘em turnin’ pages!

Fortunately, I haven’t had any deep-cutting criticism. Sure, some folk haven’t been the most enthusiastic about my work or have asked questions like, “Why is this stuff in your head?” or weren’t the most supportive early on but so far, I’ve been blessed. So far . . . I know the day will come when some reader will send me a scathing email about how lousy of a writer I am, how much of a hack, how I’d be better off picking ticks off a moose, and how the paper my book was printed on would serve better as toilet paper. That day will come and I’m sure I’ll be shell-shocked and devastated, but for now . . . I’ll hold my breath.

I love this word Dean Koontz uses a lot in his books: susurration. How cool is that word? Wanna know what it means? Look it up.

Uvula is just a ridiculous word. Who ever came up with that? Also, phlegm, oyster, queue, and most anatomical terms.

Batman. He’s just a normal guy, really, no superpowers but his ingenuity and endless pit of money for all his little gadgets and gear. He’s tormented, has tons of angst (that’s another word I love), yet dedicates himself to helping others. That’s a super hero.

Flying, of course. Think of all the gas money I’d save.

I like raking leaves (because then I can call the kiddos out and watch them swan dive into them).

Anything you'd do but don't because of fear of pain? What is it? Ex. Bungee jumping, sky diving, running with scissors.

I’m not a risk taker for that very reason . . . pain. But something I don’t do for fear of pain? Ride in the front seat of a car (as driver or passenger) without a seatbelt. I also would never rock climb freestyle. And never swim with great white sharks. That Jaws thing again. And their teeth look like they would hurt. Oh, one more thing—can I give one more? I would never swallow swords.

How long do we have here? Public enemy number one? Everyone’s a victim. I once had a guy who had serious anger issues tell me it wasn’t his fault because he had “testosterone rage syndrome.” How lame is that? Don’t want to take responsibility for your mouth or your fists or your lack of honesty or your perverted tendencies? Pick a syndrome, any syndrome. And parents are some of the biggest culprits with the behavior of their children. Poor little Joey can’t help it that he mouths off and throws temper tantrums, he’s the helpless victim of a cruel disorder. Give . . . me . . . a . . . break.

Pick any of the following and have fun with it.

A man and woman sit at a table in an upscale restaurant. They each have a cell phone to their ear. What are you overhearing? Tell me about this couple…..

Woman: “. . . and then she told me it looked too small on me. Can you believe it? I should have told her right there what I thought of her sassy attitude and skinny little waist. How much do you think she eats? If she eats at all. She probably, you know, barfs it up. How else would she keep a tiny little figure like that? It makes me sick, it really does. She’s what, thirty-five? When I was thirty-five I was that small too, well, almost that small. I’m sure I was that small. Wait until she’s in her fifties and we’ll see how tiny her little waist is then. I hope I’m around to tell her her skirt looks too small. I will, too. I hope I’m around for that. I can be sassy to, you know.”

Pick one of the "story starters" below and give us a sample of your voice.

A crack broke the stillness as Terry tugged on the frozen door.

A rush of warm air slipped out through the inch-wide opening and carried with it the metallic smell of blood, burning his nostrils. He gripped the handle tighter and drew in a deep breath, steadying himself for what he knew he would find behind the door.

And what do we have behind door number one?

Despite the below-freezing temperatures outside, a bead of sweat broke from his brow, trickled down the side of his nose and caught on the corner of his nostril.

Reaching one hand around the jamb, Terry felt for the light switch. He didn’t want to enter the room and be alone with it in the dark. No thank you.

There. He flipped the switch and the overhead fluorescent stuttered to life.

From somewhere in the room—the far side?—he heard a low growl, like the gravelly rumble of a V-8 engine, followed by a low, forced moan. Joe. His heart was in his throat. He wanted to slam the door shut and run for his life but couldn’t, he couldn’t leave Joe in there alone with it.

Reaching for the Glock at his hip, he withdrew it and rested his finger on the trigger, holding the pistol shoulder high. This was it. He’d have to be quick. He’d only get one shot to put the thing down. He had to make it count.
Posted by Scrambled Dregs at 2:48 AM 2 comments: