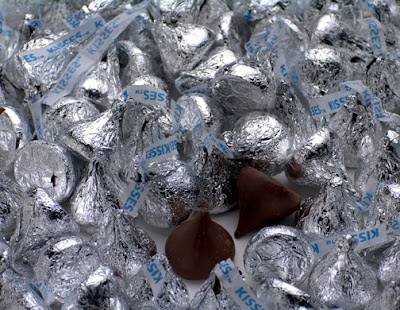 My aunt and nephew/cousin dropped by for a visit last night. After laughing at the ping-pong dogs we settled in for a chat.
Rob arrived shortly after that and with him came some serious campfire scent. N/C questioned the smell. Apparently, (I must confess that I only half-listened...as long as he's not spurting blood, I don't take work mishaps too seriously since there's hardly a day without one) the wood burning unit in the shop decided to back up and pump smoke into the building. Blah. Blah. He got it all taken care of and the only lasting consequence was the odor.
When people come over to sit a spell ya gotta offer them food. I had a partial bag of Valentine triple chocolate yum kisses I'd been hoarding, so in classic Martha Stewart hostess mode I tossed the opened bag on the table and told them to help themselves. (In defense of my hospitality skills, I did get my aunt water -- with ice.)
There was more chatter about fires and smoke. My aunt probably told the story about Scar Pie. (I was editing my N/C's work in progress.) Scar Pie, for the curious, was coined a couple of decades ago during a trip to Colorado. While we were enjoying a meal in a nice restaurant, a man at the next table lit up a cigar. Known the world over for our strong family trait of sarcasm, one aunt leaned toward the other and asked if she was enjoying her Cigar Pie. However, in the clinking of glasses and conversation, all that was heard was Scar Pie.
As the fire/food talk died down last night, my aunt, who's very polite and always shares chocolate and coffee, leaned over and offered a candy to Rob. "You want a smokin kiss?"
Now, I tell you, I've never had a woman ask my husband that while I was sitting right next to him. And my own aunt at that!
In some families, a person who made a verbal faux pas would blush and flee. Nope, in mine we will refer to it again and possibly even blog about it. You never know.
Posted by Scrambled Dregs at 12:04 PM 8 comments: