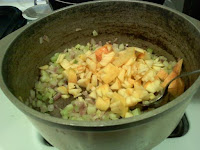 
Xta emailed me a recipe that she thought sounded like me but pretty much said sounded overall nasty. Ha. Ha. Well, I now know how she feels about me!


Kidding. Of course Xta loves me.


I liked the recipe. But it needed major tweaking. So here is my version. 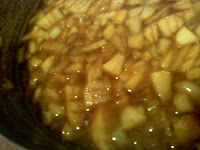 Not too sweet, not too spicy. Refreshing in an oddly delicious way. And easy. Win. Win. Win.


I also made stuffed peppers out of some leftover tidbits. I had about a 1/4 cup of Daiya cheese. Some peppers fresh from the farm, and a mish mash hash of leftover Seitan, garlic, onion and potatoes. 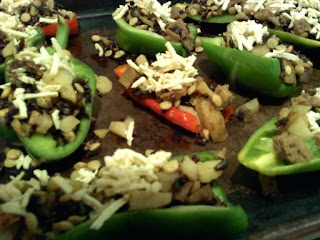 1 cup of cooked lentils
1 cup of brown or black or red rice
6-8 Bell Peppers, cut in half and seeds removed
Melt Earth Balance, toss in the garlic and onions and saute until translucent. Toss in potatoes and brown until some of the potatoes get crispy, finally toss in seitan. Add lentils and rice. Scoop mixture evenly into the pepper halves. Sprinkle Daiya cheese. Bake until pepper is tender, (about 35-40 minutes in a 350 oven).
Posted by Scrambled Dregs at 5:45 AM 2 comments: