Serials and Scenarios - My Name Is Russell Fink 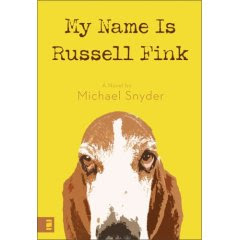 Russell Fink is twenty-six years old and determined to salvage a job he hates so he can finally move out of his parents house for good. He's convinced he gave his twin sister cancer when they were nine years old. And his crazy fiancée refuses to accept the fact that their engagement really is over.

Then Sonny, his allegedly clairvoyant basset hound, is found murdered.The ensuing amateur investigation forces Russell to confront several things at once -- the enormity of his family's dysfunction, the guy stalking his family, and his long-buried feelings for a most peculiar love interest.
At its heart, My Name Is Russell Fink is a comedy, with sharp dialogue, characters steeped in authenticity, romance, suspense, and fresh humor. With a postmodern style similar to Nick Hornby and Douglas Coupland, the author explores reconciliation, forgiveness, and faith in the midst of tragedy. No amount of neurosis or dysfunction can derail God's redemptive purposes.

If you are a fan of Ray Blackston, you are going to want to check into Michael Snyder.
With fresh and humorous storytelling, Snyder dumps us into the world of Russell Fink. Russell oozes dysfunction what with being named after his imprisoned grandfather and doomed to inherit his father's double chin. Russell fears the notoriety of both male role models and bad genes have pretty much cooked his own goose. After all, he's already killed once and just awaits the cancer that will surely be his reward.
With a sharp wit and troublesome tongue Russell both severs relationships and endears himself to a quirky cast of characters. Can Russell shed his wacky fiancee so that he can embrace true love? Will Russell ever find faith instead of empty religion? Does Russell deserve anything good or satisfying?
I wanted to hug Russell and make him a homemade meal, or at least pour him a bowl of cereal. I found myself surprised with a completely unexpected revelation within the story which was nice.
My only non-rave, but not big enough to keep it from a five star read, is that the end felt a little rushed with the unraveling of the details. But this was definitely a minor concern. If you must have "all your ducks in a row" in your endings you might have an issue with some ambiguity.

Russell is a satisfying and introspective read. Fans of Annette Smith's A Bigger Life should find it appealing also.
I am a Snyder fan, and am anxiously awaiting the next release.
I wouldn't mind a follow-up to Russell, I wasn't quite ready to leave him.
Come back Friday for a slightly quirky ; ) slice o' Mike.
Posted by Scrambled Dregs at 6:19 PM 1 comment: