Serials and Scenarios - Embrace Me 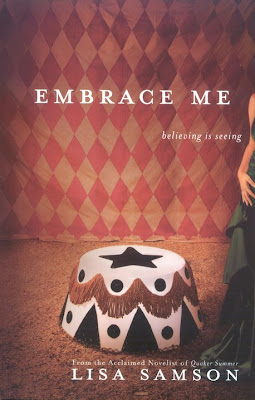 Click on the cover to find out more about Embrace Me, and here to visit Lisa Samson. She answered the Dregs questions on a previous visit, here. (scroll down)

If you'd like to read the first chapter....here you go.

Lisa Samson has crafted a novel that will likely thrill her fans. Not only because Samson shows her immense talent with words in Embrace Me. But because Samson revisits some characters from previous novels. I was pleasantly surprised to find out some characters that I grew to love are doing well -- thriving even. But those folks aren't the focus of the story.

A character study unlike any I've ever read, Embrace Me, showcases wounded characters over the span of a decade or so. Drew emotionally drowns in his selfishness and then attempts to purge the selfishness out of his system one cigarette at a time. Eventually his outside scars will mirror his inner ones. Valentine, has become a cynical and wounded heart encased in a reptilian mask. In an attempt to survive she sells peeks of her damaged face at a carnival side-show. Billed as Lizard Woman, she flaunts her pain, but becomes a prisoner as she will only go out in the darkest moments of the night. A smattering of additional characters like Lella, the sweet, selfless "human cocoon" who gives Valentine a reason to go on living, Gus, a modern day monk, Blaize, the woman who takes Valentine and Lella in, add richness and even more depth to the novel.

The story span begins with Drew's meltdown in 2002 and Valentine's arrival in the late fall of 2008 and the unfolding of details regarding a very, very small world and a very involved, very big God.

I will say that some readers might struggle with the subject matter. Samson doesn't paint false pictures. Her characters are very real, and often not pretty. They resemble real life churches and families, those who don't hide their dysfunction under glossy "church face" glitz and glitter anyway. Rough subjects and rough behavior fill Embrace Me. One of the reviewers I work with struggled with writing a review and with finding the point, so unless you like digging into characters and are unconcerned about plots that leave breathing room, you might want to look over several reviews before buying Embrace Me. But if you like Christian fiction that pushes the envelope and makes you think and get lost in the lives of broken people...I recommend it.

Posted by Scrambled Dregs at 3:07 PM No comments: