Full day on Saturday.
We had a bridal shower at 7:00 p.m. ^ (^ is going to be the new unpronounceable symbol for the daughter who used to be known as 24.) (Do you think that's as amusing as I do? If not, that's okay. I'll laugh enough for all of us.) ^ made a zucchini chocolate bundt cake that turned into a keeper. (But that's not all she made this weekend.) I made a few items, too. The most memorable was the Vegan Phillie Sandwiches. Yum. Sizzle. There was an issue. I sliced up all the peppers we had on hand, one of them turned out to be hot. Not sure of the actual pepper, but it was S-P-I-C-Y. My hands HURT, as in burned, for most of the evening and even first thing in the morning.


But ^ didn't have any food fail issues. These Harvest Cinnamon Rolls were amazing. We will continue to tweak them because the pumpkin flavor could be a touch more. Recipe details below.
We also went to the farmer's market for the first time this year. We haven't gone because of our terrific CSA box. I met an organic farmer who's into sprouting and microgreens. I asked if they ever welcomed volunteers who wanted to learn the skills. She lit up and answered affirmatively. Yes! 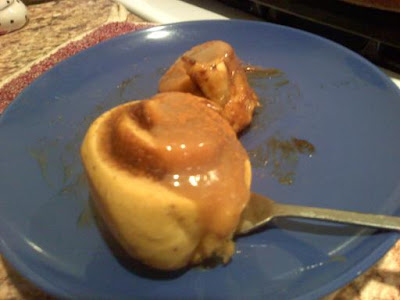 ^'s boss had told her about an organization in Omaha that serves gourmet style organic food and takes donations. Since we were near, we headed over for lunch.
Table Grace Cafe truly does operate on donation only. And it does serve gourmet food. Yum. I was so hungry I didn't take any pictures. Oops. But we'll go back.
Sunday brought a "Walk A Mile in Their Shoes" event at the Open Door Mission. Toad-Boy mentioned that he and a few of his students would be taking part so Rob and ^ and I joined him. We walked a mile, in drizzle, to the mission, slurped soup, took a tour, and our entry fee paid for ten meals for hungry folks and a T-shirt for walkers. There was another terrific walk for a good cause last weekend but we couldn't pull that one off. If building an orphanage in Africa is a hot button for you, you can check them out here.


Mix yeast, sugar, and heated almond milk in a large mixing bowl and let stand until foamy. Add egg replacer, pumpkin, melted vegan butter, applesauce, flour, and salt.
Mix well and knead for 5-10 minutes. The dough should be firm and smooth, not sticky. Keep flour handy to add if dough is too sticky, just add a little at a time.
Set the dough aside in a covered bowl and let double in size. (left overnight to rise)
After the dough has doubled, turn it out onto a floured work surface, cover, and let rest for 10 more minutes.
As the dough is resting, mix the cinnamon with the brown sugar.
After the dough has rested, roll it out into a rectanglish shape (can't do a dough rectangle in our house).
Spread dough with vegan butter, then sprinkle each dough evenly with your sugar mixture. You can add other items to your filling like nuts or raisins.

Roll the dough into a log, so it the roll is longer and thinner, like horizontal profile verses landscape.  Then cut the rolls so that you have even slices.
Place rolls in a lightly greased baking pan. Cover and let rise until nearly doubled, about 30 minutes.
Meanwhile, preheat oven to 375, and make your glaze.
Bake rolls in your preheated oven until golden brown, about 20 minutes and check to make sure they are done – if not, bake another five minutes and check again.
I apologize for the font issues. Annoying.

Posted by Scrambled Dregs at 3:55 AM No comments: