Scraps and Snippets ~ Last Farm Day and a Song... 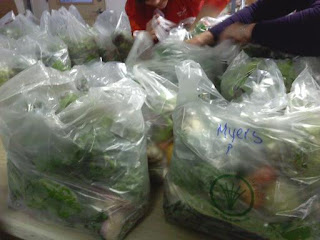 Yesterday was the last official farm day of our extended CSA season. I can't believe there were still veggies to pick and pack. But there were. Spinach leaves the size of my hand, a bag of mixed green lettuce, sage, rosemary, thyme. (Makes me want to burst out in song. Oops, more about that later.) Tomatoes, Swiss Chard, garlic, radishes, turnips and beets. A full bag of yumminess. We had been recycling boxes every week. The picture shows just a few of the bags we packed. 24 of them that almost covered two 8 x 4 tables. That's a lot of stuff to pick, to wash, to weigh, separate, and pack. But it finished the year on a tasty note and shows that even baseball sized hail can not kill spirit, only a few plants.
Now on to &'s embarrassing moment.
She and I tend to be singers. (Not in public, usually, mind you). The songs we sing are usually motivated by what is going on around us and set to popular tunes/and or composed on the spot tunes. I suppose I started this twisted little thing. When the kids were little I'd sing while I drove. Or when they were pouting, or throwing temper tantrums, or whining. Sometimes in moments of cuddling, but the kids would usually put their sweet little hands over my mouth then. So maybe that's why I'd sing where the could not reach my lips. Anyhoo. I just made up songs and got a real kick out of it if they rhymed accidentally or fit into the tune. The louder the background noise (whining et al) the louder I sang.
& has this "gift". We actually have called her the singing bush girl (the movie Three Amigos...if you've not seen it, you are missing out.). So, on Sunday, the dogs had just gone out to go potty and & let them in and began singing to them. I was upstairs and heard the singing, and since it's a usual background noise, I didn't pay attention. Until I heard conversation. Uhhh. What?
& had her back to the front door, pretty much standing in the doorway, the door was open save for the glass storm door. She was singing to the dogs and texting. Singing real loud. Suddenly, from just behind her she heard a timid knocking. She silenced the song, turned and faced some young, slightly smirking man on the other side of the glass. He was just going through the hail-whacked neighborhood leaving a business card if anyone was looking for a carpenter.

I wonder if he's telling the story about the crazy singing lady.
Posted by Scrambled Dregs at 5:27 AM No comments: