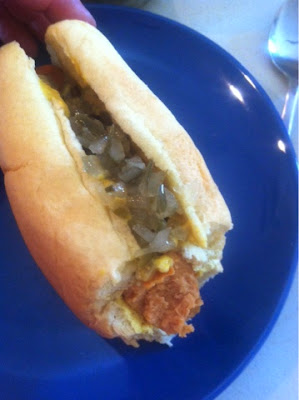 Sometimes "junk" just calls your name and you have to answer right? One of the only meat products I actually liked back in the day when I was a meat eater was a beef hot dog. I could pretend that a beef hot dog was purer and somehow nobler. Because we all know and refuse to think about what's really in a $.99 package of hot dogs.

I didn't really crave them very often. But if there was a picnic or a BBQ I'd hope someone went the classy route and supplied beef hot dogs for the gourmets in the bunch. 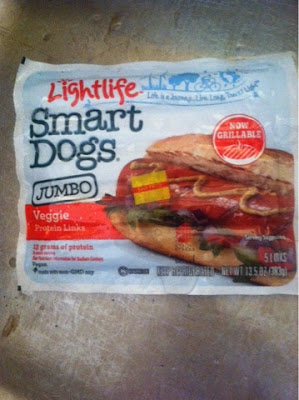 A few weeks ago while wandering through Natural Grocers I discovered they had a markdown section. What the Wha?  Bargains on vegan foods or organic veggies/fruit? Oh yeah. So now I hit the spots every time and nosh on $2.00 bags of organic peppers, onions, tomatoes, lettuce and 1/2 price non-dairy items that are at the end of shelf life. Happy. Makes me very happy. 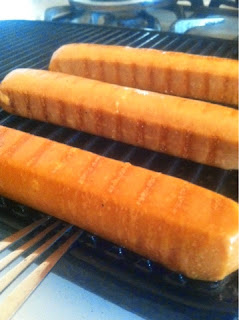 So I found a package of vegan hot dogs. I wouldn't have purchased because sometimes faux meat is just kind of a cruel sleight of hand. But back two years ago when & and I went to Portland for VegFest we were given a sample of a chunk of hot dog in a bun and were able to put toppings on it and scarf it down. The dang thing was great. But was this sale package the same brand? At 1/2 price I was willing to risk it. I brought the little hummers home and popped them in the freezer for the right occasion.

Last night was that occasion.

I pulled them out because we had white processed non-food buns. (Why does uber processed sometimes just taste so good?) And I had a hankering. And I also had to rearrange some stuff in the freezer because things had gotten out of control. I won't tell you the details...but let's just say I need to check my freezer before going to Trader Joe's. There are apparently items there that convince me that they NEED to go home with me on EVERY trip.  But I digress.... 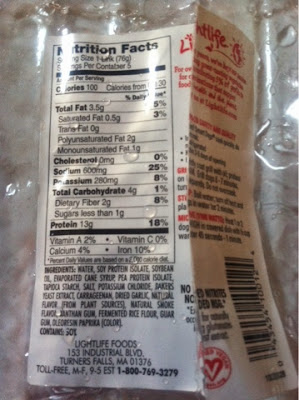 My cast iron griddle has a smooth side and a grill side (is that proper? Would it be corrugated? Because that's what it feels like it should be...whatever, we will call it grill -- it leaves little bumpy sear marks on whatever you cook on it.) So I grilled them up. And slapped them on the buns and squirted mine with mustard and spooned on dill relish (organic, of course, ha ha). This is my perfect hot dog scenario. 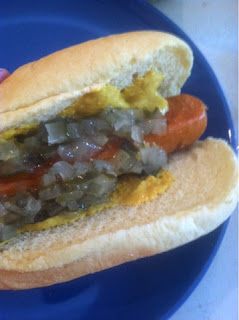 And. It was stinking delicious! Seriously. Rob looked at the little flesh colored, striped tubes on the griddle and raised an eyebrow. "Vegan hot dogs." I said. He picked one up and gingerly took a bite. (without any frills and toppers) He chewed. And put them on his plate. And ate them.

Can I recommend these? Seriously, yes. You have an itch to scratch and only a hot dog will do? ... I don't think you'll be disappointed. On a side note, I took a picture of the back of the package. They aren't as trashy as one would think. Non-GMO soy, 13 grams of protein and 100 calories.

Thanks Lightlife. Me likey Smart Dogs