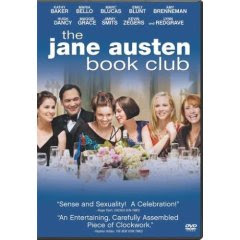 Jane Austen's books overwhelm me with the number of characters. I have to be exposed to her stories more than once to fully feel like I get her world. "Book Club" is a movie not unlike Jane's books in that way. It's a movie that needs to be watched more than once to begin to see the inner workings within the characters.

I read several reviews before renting Book Club and decided I needed to see it for myself. I understand what the issues are with the folks who didn't care for the movie. For starters, this isn't a G-rated historical romance like Austen's beloved novels. It's set in modern day and the movie actually opens with scenes of chaos in the busyness of daily living. Ringing cellphones, automated transactions and traffic. Then it moves into a funeral scene. The characters begin to plan something to help the bereaved and suddenly there is another crisis -- a death of a marriage. The characters, a group of old and new friends, need something good to focus on.
So they choose to meet for six months and cover a different Jane Austen title each month, hoping to bring romance and genteelity back into some hurting lives.
These are the complaints I picked up in other reviews.
The sexuality aspects of the movie are moderately strong. If you are a concerned parent, by all means watch it first. The major sexual themes -- a teacher with an emotionally, borderline physically inappropriate relationship with a student, a marriage suffering from an affair, another marriage on the verge, a young lesbian with more than one partner throughout the film, a woman married six times and still looking for lucky number seven.
The second complaint about the movie seems to be the lack of Jane Austen's works in the film. Yes and no. The "book" discussions are short and there is very little actual Jane Austen prose shared with the audience. Instead you are given glimpses of each character devouring a different book each month. Interestingly the book club members' and their relationships end up looking like little slivers of Austen's characters. For example, Emma surfaces in 3-D when Jocelyn tries to fix her broken friend's life by finding the perfect man. Jocelyn doesn't need a man, of course, until he seems to be looking elsewhere. Young Allegra who gives her heart away and receives it back crushed and yet enters rapidly into another relationship not unlike Marianne and Willoughby. Or maybe Allegra and Corrine are the modern version of Mr. Wickham and Lydia Bennet.
The third issue with the negative reviews was the lack of character development and/or the miracle changes of heart. Two marriages, one with an affair, another with an emotional affair that could ruin a career as well, a woman in her forties who has never been in love, a young man in love with a woman a decade or so older, a lesbian who loves with all her heart one day and hates her lover the next.
True, these are huge issues, but this movie takes place over months as they meet to discuss the books and we are given only glimpses of time throughout that month. So what seems fast, unbelievable and overnight is not fully the case. And having been married for twenty-six years, I can completely believe that one person who begins to think differently can change the whole flavor of the marriage overnight, if the thinking truly changes. That's what crisis does, changes people. And there are plenty of crises.
Overall, I really enjoyed the movie. The characters were rich and interesting and I ended up caring about them. It encouraged me that both marriages seemed to flourish once they got beyond the pain and made better choices. I think "Book Club" could be a great girls night movie, or a date movie if you have realistic expectations.
Next week I'm hoping to be able to review Lars and the Real Girl. Of all the movies I want to see this year...Lars is at the top of the pile.
Posted by Scrambled Dregs at 12:31 AM No comments: