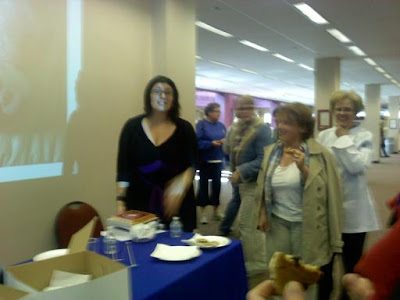 Part 2 of the Culinary Conference.
Isa's session was tasty and entertaining. She brought three kinds of cookies. The maple walnut cookie was amazing, surprisingly beating out the double chocolate one.
She also has a dry sense of humor. This is my favorite. I am so not dry. If I think something is amusing, it falls out of my mouth followed by laughter...my own, sometimes ONLY mine. But someone with dry humor can deliver a killer comment with no emotion even flickering across their features. Isa delivered.
She started with a matter of fact comment that pretty much slayed the group. The previous gals had shared the details of the construction of their cookbook which included lots of local history. One piece, a rare find, proved the legend of the creation of the famous Reuben sandwich in our neighborhood. One of the gals shared that New Yorkers had claimed the sandwich beginning in the 40's, but the cookbook authors have a menu with proof that it was served locally in the 20's. I don't know if these gals were taunting the New Yorker in the audience or were clueless that they were tossing a gauntlet...
Isa began her session and mentioned she grew up in New York, where the Reuben sandwich was created. Ha.Ha.
You just have to love people, don't you? One guy's phone rang right in the middle of her talk. It didn't just ring, first an electronic voice loudly chimed each digit of the phone number calling him. Then the ring. He did excuse himself to answer it. A few minutes later he returned, told Isa that his friend was in some other state, and wanted him to tell Isa that she loved one of her salad recipes. Unfortunately, Isa was in the middle of a sentence, during her speech, at the time he delivered the message. Yeah. 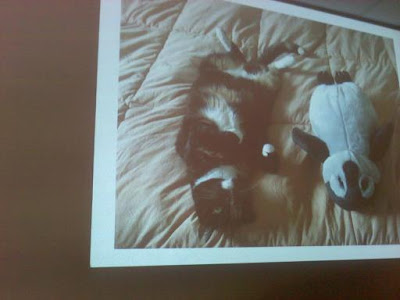 The picture of Isa gives a nice fun house effect. The lights were half on, half off as she had a power point going. This was snapped just as my mom finished telling her that & and I are big fans and we were going to begin stalking her. The fuzziness of the picture is because I really don't know how to take a picture of someone who's just been notified of impending stalking without being real creepy doing so... I think the lighting does a great job highlighting that moment of horror for Isa.
The other picture is one of her power point ones, one of her cute kitties and a friend. Not sure if this is the famous Fizzle cat, but regardless, it's a cute one.
Tomorrow. I have to share &'s hilarious "oops" moment that has NOTHING to do with Isa.
Posted by Scrambled Dregs at 4:52 AM No comments: