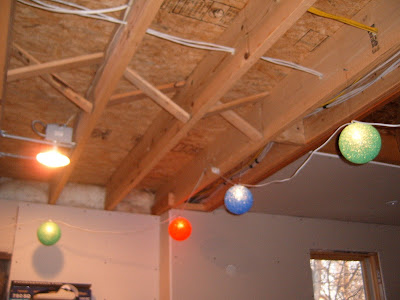 Grandma turned 90. That's pretty huge, even though she's not old enough to be on whichever morning show celebrates centenarians.
What do you do for a 90 year old who has either had everything she's ever wanted, or doesn't want to go there at this point in her life?
You have a party.
Since Rob tore down our kitchen wall turning our kitchen area into a KITCHEN AREA, we decided that we were the likely place to be able to tuck 40-plus people into a cozy atmosphere.
Pat came to decorate. It's been awhile since I picked on Pat. So you may have forgotten that he has a flair all his own, and a certain way to do things. However, I wasn't surprised to see my dad, (Pat) hauling in large plastic bags three nights before the party.
"Whatcha got?" I asked.
Now not only is Pat full of flair, he can't pass up a screamingly good bargain. He grinned. "Well, all the Christmas stuff is dirt cheap and look what I found." He reached into a bag and pulled out a set of three orbs in red, green and blue, each the size of a mammoth grapefruit.
"Cool." I said. "Maybe we could put them on the studs in front of the window." I've grown used to the bare stud look. I actually find it attractive in a primitive way.
Pat grinned. "Oh, I have a few of them. I thought we could put them on the ceiling."
Pat is precise, and our outlets were limited. But after two hours my ceiling looked an awful lot like a really anal-retentive prom decorating committee had come through and left their mark.
So, that was a full three months ago. Guess what's still hanging in my kitchen? And guess who still plugs them in on occasion? Ya know, sometimes life just demands party globes.
Posted by Scrambled Dregs at 5:16 AM 2 comments: