Happy Thanksgiving --- The Other Holiday 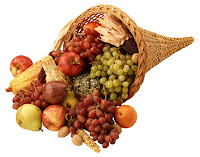 I'm Thankful Because....
Even though I'm prone to complaining about it -- my life is full. I'm rich -- in marriage, in family, in friendships and in interests. My life is peppered with satisfying conversation, deep inspiration and soul-touching love.
Laughter overflows in my life. Sure, not always. Sometimes I'm just crabby or I encounter contagious crabby people, but more often, I encounter quirk and the joy of life personified.

I have to tell this little story.
Our church put on a Thanksgiving dinner Sunday evening. I had provided 6 quarts of mashed potatoes. Another woman had provided a bit more. Her potatoes were served first so the majority of mine were left. The crock-pot had been set to warm so the creamy potatoey goodness remained warm.
I did not want to return home with 5 quarts of potatoes, so I strongly encouraged people to take some home. Everybody was stuffed to the eyeballs so it was a difficult "sell." One guy hesitated...ha,ha, I knew I had a taker. So I handed him a quart size zipper bag and told him to fill it up. I glanced over and noticed he had a little trouble. He grabbed his daughter and they filled the bag while he shook his head and squawked as she dropped hot potatoes on the back of his hand.
I told him to bring the bag into the kitchen to clean it up. He grinned at me. "Thanks a lot! That was fun. Did you set me up or what?"
By now I was laughing pretty hard. Did I mention that this guy used to own a bar/restaurant? "Sorry. I didn't know it was going to be that difficult."
Now we were both laughing. He washed his hands. "You're crazy."
"No. People think you need alcohol to have fun. Amateurs. Give me a bag of hot potatoes and I'll show you real fun."
Finally and most importantly, I'm thankful for God. He has saved me from myself. He has offered me truth instead of the lies I've believed. He's given me living water instead of the nasty pond scum I'd been drinking. He's taken my messes and fashioned them into something more beautiful than I ever thought possible. He's replaced my despair with hope, my emptiness with abundance, my fears with faith, and my death with life.
Have a blessed Thanksgiving. Eat well, laugh often and live every second.


Posted by Scrambled Dregs at 12:23 PM No comments: