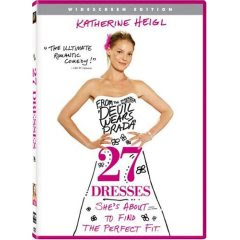 Katherine Heigl (TV's Grey's Anatomy) lights up the screen in this charming romantic comedy from the screenwriter of The Devil Wears Prada."
Heigl stars as Jane a romantic completely selfless woman who has been a bridesmaid in no less than 27 weddings. Unfortunately her own happy ending seems to be nowhere in sight. Until her younger sister Tess captures the heart of Jane's boss -- on whom Jane has a secret crush inspiring Jane to change her "always-a-bridesmaid" destiny.

My Review:
Wedding Planner fans have already probably seen 27 Dresses and loved it. The two films share a love of wedding details and the romance of the moments...all the moments leading up to the trip home from the honeymoon.

I happen to fall somewhere in that category so I liked 27 Dresses. Some of it I liked a lot. Jane and Kevin have a sweet and spicy relationship that comes off as believable. Katherine Heigl also plays the part of a martyr with some great facial comedic moments. I liked the flavor and personality of the film and had fun watching it. I appreciated that I didn't have to watch sex, though I heard a bit about it, and there were behind the scenes moments.

I didn't care for Jane's sister Tess and didn't buy into the passive aggressiveness of the relationship and Tess's extreme selfishness. I didn't buy Jane's long-term crush on George either. Jane's best friend claims to have a defective moral compass and demonstrates that throughout the film. Don't get me wrong, she's funny, but it's not humor for your great-grandma or your ten year old. There are several s-words sprinkled throughout and an F-Bomb is muffled during a massive Jane meltdown.

Overall, 27 Dresses is a fun movie that falls into the PG13 category for a reason. It is one of those that a group of women can pop in while they gorge on chocolate and popcorn and paint their nails (hopefully not at the same time). Or a fun date night if you don't get embarrassed with innuendo and outright crude comments. Good for a few laughs and a couple of sighs.

Posted by Scrambled Dregs at 12:01 AM No comments: