Scribbles and Scrambles ~ Lessons from the Law ~ Woof, Doggie ~Dog 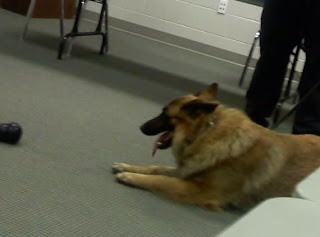 Drug dogs are a fascinating topic. 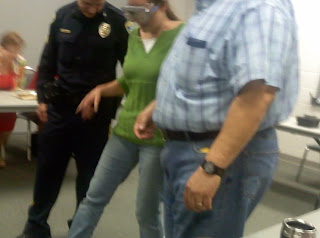 Our little guy, I’ll call him Buddy, to protect the innocent, :  ) came strolling into class Thursday night looking nothing like a vicious dog. He basically fixated on his toy during the officer’s Q and A with the class. And often jumped up for some quality time with his policeman.

Buddy is trained in three areas. Two of those include biting. Shudder. Let’s just say, whatever you are packing, whether it’s a pocket full of dog treats or 3 grams of cocaine, the last thing you want to do is run. Not only is Buddy fast, he’s smart.

The officer pointed out something else I had never considered. Buddy’s jaw is uber powerful. Police dogs work out their jaw muscles, and Buddy’s are ripped, or will rip a few pounds of flesh if you get on his wrong side.

Buddy didn’t just stare and army crawl creep toward his toy, he shed. A lot. The officer’s right side was covered in dog hair, as was the floor where Buddy hung out.

A dog’s sense of smell is crazy good. Buddy can smell the tiniest residue of drugs and is rewarded for finds with play time. Buddy is also multilingual. His commands are in a couple different languages. Makes sense. One of my classmates is a lawyer who thought she’d stump our dog-management officer with some recent legal issues that popped up for a dog handler in another state. She ended up asking a condescending question and then blushed when the officer not only answered her question, he did so in her legal language and subtly put her in her place. Ha. Ha.

The second speaker of the night was “the” traffic cop. Close to retiring, this was his last class, and he reminded me of the movie/television stereotype of the wiry, rugged cop with the glint in his eye and the generous sense of humor. He walked us through a drunk driving arrest. And the tests. Magic drunk goggles (not to be confused with beer goggles) were produced which a few crazy individuals donned while attempting to complete the physical tests With the simulated legal limit and double legal limit goggles, there were some hilarious results. Of course, the reality of someone driving under the same conditions is horrifying. The highest blood alcohol he has personally seen is 4.8. Only a true alcoholic could boast that number, it's a deadly blood alcohol cocktail.

I also was reminded that traffic stops can be one of the most tense and deadly type of police work. An officer never knows what he/she will find when dealing with a stop. If you are pulled over, one of the more threatening things you can do is go for your glove compartment. They prefer that you keep your hands on the wheel at 10 and 2 and wait to be instructed to hand over your license and registration. Tinted windows are an unknown and dangerous thing that puts a police officer on high alert. If they can't see what's going on in the car they have to be prepared to react to the worst case scenario.

Give police officers a break, if they seem stressed or a bit intense when they pull you over, be kind and respectful, their jobs are stressful and intense, even over something as minor as catching you doing something stupid.
Posted by Scrambled Dregs at 6:55 AM No comments: