Serials and Scenarios - Nobody 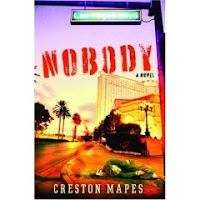 Nobody (Click on book cover to visit Amazon page)

Humanity deals with several major questions often wrestling with them at two a.m. or during crisis. The big one is “Does God exist?” But the more troubling, “Does my life matter?” steals more sleep.

Nobody is a book that explores the second question through compelling storytelling. Creston Mapes has grown as a writer and the tightness of his prose makes Nobody a tense read as Chester, a millionaire “nobody” manages to change lives as a homeless man on the streets of Las Vegas. More amazing is the effect of his murder on the people left behind.

Told as a multiple first person narrative the plot moves smoothly from the first minutes after Chester’s murder to the beginning of justice for his murderer.

Nobody works well as a modern retelling of the parable of talents. It's worth digging into and scratching the “Does my life make a difference?” itch.

Come back Friday for an interview with Creston.

Posted by Scrambled Dregs at 8:22 PM No comments:

I almost feel hypocritical. I went shopping yesterday in several stores and I even browsed at one. Does it count that I had Christmas in mind? I hope so. And a wedding shower to buy for, one where I'm in charge of the games and the gifts for the winners and a gift made up of many gifts as one of the games. So I'm vindicated right? If any of the locals who read my blog saw me, I shopped willingly only because of agenda provocation.

Now, since the crushing burden of my shopping trip has been lifted through publicly restating and justifying my reasons for disliking the activity...I return to my story. (and thanks, Janet, for your thoughtful and extremely convicting comment on part 1. )

Several of you won't believe this. Most of you will, especially if you remember the post regarding my grand entrance into the Dallas hotel...the one stopped dead by the glass revolving door.

Grace is not my middle name.

Two of my tricky female housemates (the older two who drive and have a bit of expendable income) talked me into a visit to Target and J C Penneys. Okay. Two stores...how do I forget their sneakiness between the bad experiences?

Of course I went. At least they are entertaining.

Penneys and Target are a mall apart. Both anchor stores with many, many, many stores between. After the seventh "just a quick look around," I told them I'd meet up with them in Target and headed out.

This is where it gets a bit indelicate. I apologize for airing dirty laundry or describing a women's restroom to my more gentle readers. A simple click will save you further reading. Ready? Click.

Now for the rest of you...here goes. I had to use the facility. This is really common. My mother once told me my bladder must be the size of a pea. Maybe, maybe not, but Rob claims that I know every bathroom along every piece of interstate ever traveled.

Methinks he exaggerates. Except for the one time in Kansas City. That was unfortunate and a story for another day.

Back to Target, specifically Target's restroom. I'm uncertain about the details involved. I'm pretty sure I did not lose consciousness, but somehow in the point between entering the stall with bags and baggage and the refilling of the toilet bowl with clean water, I realized that a chunk of toilet seat bobbed on the water like a lonely chunk of ice during the spring thaw.

I think I broke the toilet.

What would you do?

I knew it wouldn't go down the hole and clog the toilet since it rode the white water like a well used kayak. I wondered what I'd do with the piece if I scooped it out. Throw it in the trash? Had I actually been the one who broke it? Were there hidden cameras? Did I really want to stick my hand in a public toilet?

So, I decided to blog about it. If you're from Target...sorry. Next time I'll have an action plan.
Posted by Scrambled Dregs at 6:35 PM 1 comment: