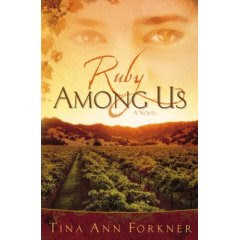 Tina Forkner visits. Charming answers to the dregs questions. Don't you think? Don't forget to read the first chapter of Ruby Among Us.

It would have to be the bat, Stellaluna. Just like her, sometimes I just get the sense that I don’t quite belong in this big world of publishing. When Stellaluna discovers she’s really a bat and that the reason she can’t perch on a tree limb is because she wasn’t made to, I get a little teary eyed.
And I love it when her bird brothers and sisters try hanging upside with her. It’s a great story about misunderstanding who we think we are and learning to be friends with people who are different.

It would be Shakespeare. “Who were you really and which stories did you actually make up and which ones did you simply adapt for production?”

Some out there in writing land have strange rituals. Share yours.
I don’t think it’s strange, but I have to have music, a quiet house, and something hot to drink nearby. My music consists of all different styles, but it can’t be anything loud. I still like Edie Brickell and the Bohemians, REM, Harry Jr., U2, Keith Urban, Amy Grant, Norah Jones, and lately it’s been a little bit of Colbie Callait, Faith Hill, Joss Stone, John Mayer and Jordin Sparks. It changes depending on the day of course. As long it’s not too loud, the flow of my writing sort of moves with the music.

“After all, the richest source of my fiction does come from life as I have misunderstood it – its contradictions, its unanswerable questions, its unlikely twists and turns.”

Amy Tan, from The Opposite of Fate

Believe it or not, the 1800’s. That’s why I love Jane Kirkpatrick and Kim Vogel Sawyer. I write contemporary fiction, but at one time I thought I would be a historical writer. I think I am so intrigued by it because it gives me a glimpse of how my great-grandmothers might have lived. It inspires me that they lived through those times that took hard work and probably a lot of faith.

How does something worm its way into your heart? Through tears, truth, humor or other?
Something worms its way into my heart when I am put into the circumstance myself, so I guess it would be truth. For example, I always felt compassion for single moms, but I didn’t really understand or respect them until I went on that journey myself and saw what it was really like. I’m happily married now, but I now have a bigger heart for single parents and their children because I understand how someone can end up in that situation.

I’m not just trying to score points with my mom, but it would be the Bible.

Favorite book setting and why?
I think a book or a scene set beside the ocean. The smells, the sounds, the expansiveness, the sense of freedom seems to open new possibilities for the characters that can’t be had in the boundaries of land and cities.

It absolutely has to be Mrs. Incredible. I don’t know how she does it all with being a mom and a superhero, but I think if I had her stretchy arms and that tone of voice she gets when she’s mad I could totally get people, like my kids and hubby, to do my bidding and change the world.

That’s easy. Besides Mrs. Incredible’s stretchy arms, it would have to be her daughter’s ability to disappear so I could get some uninterrupted writing time.

It would have to be the way we make snap judgments about each other. Just look at how the media blasts the stars and how society just keeps on wanting to hear more of it. A little bit more grace in our society would be fantastic, along with some rearranged priorities about what is truly important.

Posted by Scrambled Dregs at 12:10 PM No comments: