Serials and Scenarios - Me Unleashed- Part 1

I received a challenge last week.

What should I do? It's not like you don't know my "voice." But then on the other hand, my anonymous friend Xta knows me far too well and yet continues to call me. I do think she calls me for entertainment purposes only, since she tends to get me into trouble or at least into situations that threaten my sanity.

Xta began our friendship with a big, hairy lie, and has kept me on my toes since. This is her challenge.

Kelly,I would like to read an interview you do with...yourself! How about that for next week? I want to know your worst grammatical pet peeve and periwinkle preference and the whole caboodle.Anxiously awaiting, Xta

The sickening part of this whole thing is that I lose so many blogging ideas just from the split second thought to later recall, that I consider this a keeper.

So over the next few weeks, you'll find random posts wherein I'll ask myself the burning dregs questions.

This is hard. Do I apologize to all my past guests who've had to scramble for an answer? No, they could pass.

Lucy from Narnia. Not for the kingdom or the wardrobe or even the adventure. She seemed the most innocent and sweetest of the four and she loved Aslan and spent time with him. Aslan is such a strong allegory for me, and I read the series when I was young enough to be shaped by Aslan's character and strength. Lions are favorite animals because of that influence.

Who and what? I don't leave a lot of questions unasked or carried around like a burden. I admire many, but do I have a burning question? For someone?

I'd thank my grandpa for his enthusiastic support. Grandpa Henry always believed in me. He encouraged my artistic side. I'll never forget his compliments and his quiet demeanor. When Grandpa spoke, people listened, including me. If he hadn't been so encouraging and excited about my dive into writing, I don't know that I would have continued to pursue it. His response made me wonder if I really did have some talent. "Thanks, Grandpa. I know you'd love the Pat stories. Maybe one day I'll tell the one about you, me and Grandpa Bill in the 54 Ford."

I don't know that I consider myself a real writer yet. I have a love/hate relationship with procrastination. I try to beat deadlines with days to spare. But book length works paralyze me. And I have this horrible habit of getting 10,000 to 20,000 words into a story and then setting it aside to ferment.

I read a popular novel several years ago that left its mark. I absolutely hated it. The characters were ones I didn't care about which ended up being a good thing because one died.

Unfortunately the character died only after she began to become someone I could like and I had invested hours into her life. Not only did the death bug me, but the fact that it felt tacked on and almost random annoyed me to no end.

I can handle death in books. But this left the heroic, bittersweet and hope out of the equation. I'd change it by not reading it.

To Be Continued - Randomly.

Scribble and Scrambles - Ask Me About My Grandpuppies! 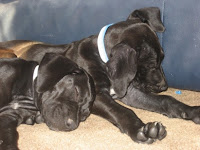 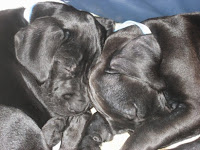 Fortunately, we don't have any pictures of them piddling on the floor.
Okay, now everyone...one...two...three...Awwwwww!

Am I going to be insufferable when I have babies to brag about? Maybe.
By the way, I am way too young to be a grand of anything, so I'll wait.
Patiently.

Posted by Scrambled Dregs at 9:06 AM 2 comments: