Serials and Scenarios - These Boots Weren't Made for Walking 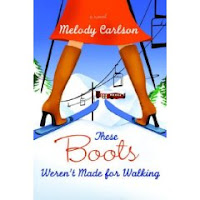 Click on the book cover and go visit the Amazon page.

Hopefully, we'll be back on Friday with an interview.
My Review:
Believe it or not, this is the first Melody Carlson book I've ever read. My youngest daughter loves her teen color series, but not only have I never picked one of those up, I've not grabbed one of her adult books either.

Cassie, the first person pure chick-lit protagonist, is both amusing and cynical. Already a positive in my book. Much mention of shoewear and clothing designers guarantees that chick-lit purists will find much to like in this novel. No spa, but there is a fitness center and an active social climate. The passel of girlfriends is also present with the twist being that one of the biggest social thorn's in Cassie's side ends up being very closely related.

Several attractive men walk in and out of the picture.

As Christian label chick-lit, and because teens who've read her material may want to pick up These Boots Weren't Made for Walking - I want to warn those who may struggle with Christians drinking alcohol -- this read is likely to be an issue for you. If you aren't stumbled by Christians who drink without getting drunk, and you love chick-lit, you'll find this charming and fun.
Posted by Scrambled Dregs at 1:05 PM No comments:

Because of the risk of offending one or more of my faithful readers, I tremble as I type.

You see, I’m going to say a few things that may cause balking, gagging, retching or straining in some certain effusive and entertaining friends.

Even though I’ve taught a drama class or two. Even though I took a bit part in a high school play and turned my character into a scene stealer…I am not a thespian at heart.

Oh, I can play a thespian. But I am not one.

That said, I transported my child to a drama club meeting last night. She invited me to stay. Oh, the roil and boil of emotions unleashed within. Rapid-fire scenes flashed through my mind. My acting debut, the laughs, the applause. Then the scene in which I played an extra during a training video…the one where on-lookers were supposed to view a scene with horror. The director stopped everything with “Cut! Hey, you in the brown, stop smiling, this is a serious scene.” Of course my friend had to nudge me and point at my brown sweater before I realized that he was talking to me. Oops. My Bad. Then my thoughts jumped to Saturday Night Live’s Jon Lovitz, actor extraordinaire shouting, “I was only acting!”

I shook my head, sadly. “No thanks, but have fun.”

What does one do at a drama club meeting?

Do they all share stories and the one who elicits the most enthusiastic response wins? I don’t think I want to know.

I’m pretty sure I’d rather be in an invisible box with 150 mimes than in a drama club meeting.

Hey. I was only acting!
Posted by Scrambled Dregs at 6:19 AM 2 comments: