Scribbles and Scrambles ~ Thump in the Night...

Another fairly normal weekend at my house. I have begun to get ruthless with my clutter purging. I'm building a pile of clothes that I put on in the morning and for whatever reason take off. Either it doesn't feel right, look right or match. In just a few weeks if I don't pick the item back out and wear it, it's outta here. 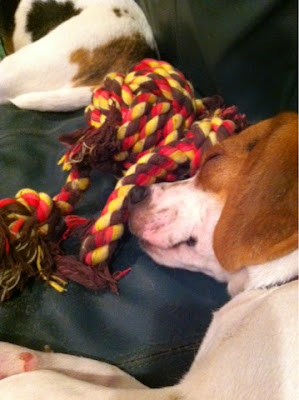 Cookbooks are also on my chopping block. I'm actually going through them and if I don't see recipes I'll make or feel inspired by they are outta here, too.

The other night Rob and I headed upstairs. As per usual, Gladys went downstairs to get her toys. The usual whining during the attempt to gather all of them in one mouthful drifted upstairs. Then a weird sound, a slow thump, pause, thump...repeat. She was dragging a huge rope tug toy and it hit each step with a thump. The picture is her enjoying the toy as a pillow. 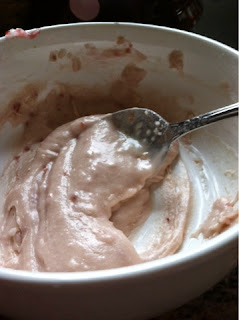 The other picture is raspberry frosting that was going to go into cake pups I made for the Vet tech program at Rob's school. (They work for food, as in they used Gladys and Gertrude's surgeries for training and the promise of treats. Nice deal.) But, I had to make more because while I was busy doing something else Rob was putting our dinner on plates. We had Gardein stuffed cutlets that came with gravy. So with my back to him,  I gestured to the little plastic gravy bag and said, "Hey, there's gravy for those." I turned around as he was smearing the frosting from the bowl on his cutlet. Oops!
Posted by Scrambled Dregs at 7:00 AM No comments: