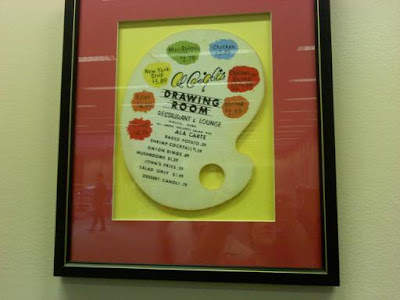 A neighboring library sponsored a Culinary Conference on Saturday. It was pretty much all about the celebration of food. The city's local college has a culinary program with a terrific reputation and, as I found out, a bistro. (Going to have to try that.) They also put together a cookbook as a fundraiser for a scholarship program in memory of a classmate who passed away. It was a fascinating panel discussion. None of them, including the instructor, had worked on a cookbook before.
The library provided lunch. Nice. Even a sage hummus. Double nice. Serendipitously, there was a cookbook exchange. We could bring cookbooks we didn't love and try to find cookbooks we could. And we did. Several Vegan/Vegetarian books to choose from. Nice. The event was free. NICE! 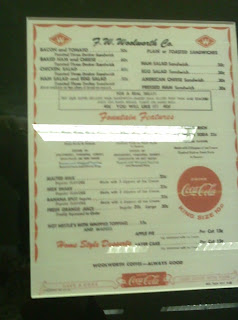 And if that wasn't enough, there were framed menus from old restaurants. Some were just cool to look at, and some were memory provokers. The prices. Yikes. My mom pointed out the menu from the restaurant at the bus station that she and dad ate breakfast at the morning after their wedding. Ha. She said at the time she thought he was romantic, but after seeing the prices she realized he was just cheap. Ha. Of course that was 50 years ago. 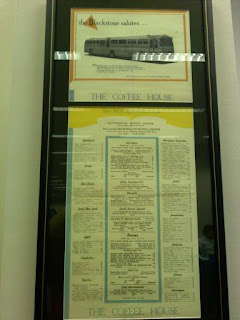 Our area is known for some pretty impressive restaurants. The library director said the reputation of fine dining helped him make his decision to move to the area.
All of that was really nice. But the cherry on top was Isa Chandra Moskowitz. Dare I finish this post tomorrow? It seems cruel. But I have so much to say. Cliffhanger.
Posted by Scrambled Dregs at 3:54 AM No comments: