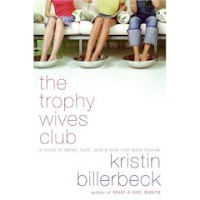 Click on the book cover to jet on over to Amazon for more information about The Trophy Wives Club. And then click here to visit Girls Write Out, a blog Kristin contributes to. Kristin's website is under construction, but there is a really cute picture of her that pops up.

You've got to come back Friday for Kristin's very interview. It's a fun one.

And finally, here is my review.

Kristin Billerbeck does chick-lit like no other, as a matter of fact, she is called a Christian chick-lit pioneer in some circles.

It seems a shame to label someone as perky, fun, complex and multi-faceted as Kristin, as a pioneer. I just don't picture her covered in dust and ready for a monument or memorial plaque. But, that said, she does know Christian chick-lit.

The Trophy Wives Club, My fourth Billerbeck read, is the most satisfying on several different levels. The men take a backseat in this drama involving a pampered princess whose prince has moved on down the road, leaving her literally out on her well-clad backside. Without money flow, career and even friends, Haley finds her fairy tale life was far more fragile than she had even entertained within nightmares. This leaves Haley an opportunity to grow without being shaped by people who expect things from her. Instead she's left to find out who she is when new friends step in and offer her help getting back on her Donald Pliner clad feet.

Though chick-lit tends to be irreverent and not-so-deep, the Trophy Wives Club carries some grown up themes that end up puncturing an attitude or two if the reader is open to having attitudes tweaked. It's rare to find a line like this in just your ordinary chick-lit..."Marriage is like calculus. Complicated and inexplicably remote. People think it's about loving one another and riding off into the sunset, but no one tells you the horse is lame or that it's an eclipse, and there won't be a sunset that day." Of course, Haley goes on to qualify that statement with classic ticked-off princess flair. "Loving someone more than yourself takes more than effort -- especially when they want something different from you. Especially when the something different is a sleazy actress. The truth of what goes on inside any marriage is really only for those involved to know. "

The spiritual aspects are realistic. I would consider the subject matter pretty edgy for the Christian fiction crowd, especially those who prefer their reading to be uplifting all the time. Haley doesn't end up with a contrite husband ready to throw diamonds at her. His character proves to be beyond shallow. Yet Haley comes out with a whole lot more love than she ever thought possible.

This is a sweet escapist read. One for those who know Happily Ever After doesn't exactly look like the fairy tales. And those who are glad for that because those Grimm brothers told some freaky stories. Those who can't tolerate divorce or a story about it may not want to pick it up. If you like Billerbeck, you should like this slightly familiar, very different novel.

Posted by Scrambled Dregs at 2:46 PM No comments: