Scribbles and Scrambles ~ My Favorite Role 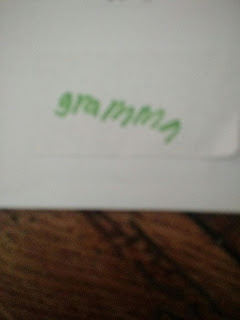 My grand babies are so exhilarating and exhausting and overwhelming and precious. I just can't even. Okay. I can and will.
The nine-year-old spent two weeks with us while mom and younger siblings were away. The first picture...so sorry it's fuzzy...I snapped it on the low down so she didn't notice I was social media-ing it. We were asked to put on name tags for church on Sunday. As per usual I was gabbing away and asked her to make me one. This is my name tag. Heart exploding. 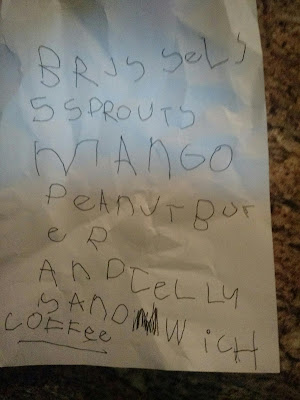 The two little ones arrived last night. Apparently the five-year-old asked about me every day. And the seven-year-old almost every other day.  It was so good to see them and hug them. Little stinkers. Ha. The five-year-old was wanting me to spell everything for her. And so annoyed if the same letter appeared twice in a row.
She asked what I wanted for dinner. I told her cake. She said something healthy first. So I gave her my menu and had to spell every word. Brussels Sprouts was nearly her undoing. "Another S?!?" I totally recommend you get yourself some grandkids if you haven't done so yet. Contented sigh.

SaveSave
Posted by Scrambled Dregs at 7:30 AM No comments: